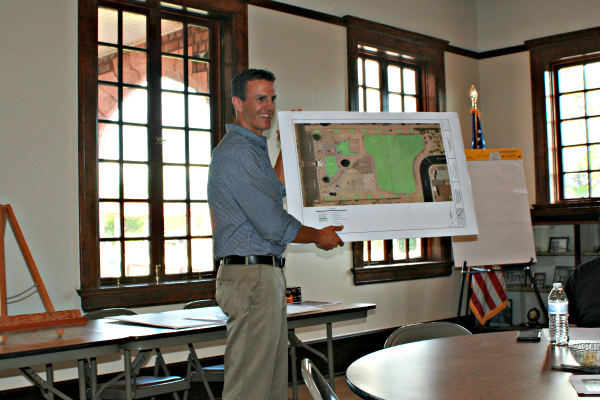 SAFFORD – The community was called upon to make some choices Tuesday, and several people showed up ready for the job.

To decide a course of action regarding the renovation of Glenn Meadows Park, the community gathered at the Safford City Annex. Freeport McMoRan recently gave the community a grant of $83,800 to develop park and sports areas. The grant money will also be set toward installing irrigation and landscaping. Also, the grant money is to be utilized for new sidewalks, shade structures, and for revamping the play area.

The planning stage is the beginning. Construction will soon start, and the park is required to be completed by June, 2017. However, Safford Planning and Community Development Director Dustin Walker, said the remodeled park should be ready by spring of 2017.

Individuals who attended the meeting selected the type of play equipment they preferred and made a list of desirable features. Walker briefed the visitors on the basic plans for the park, including planting trees and grass, constructing patios and building sidewalks. After his brief lecture, the attendees selected the features they preferred by placing stickers near their preferred option. The stickers were counted and something similar to what was selected will be placed in the park.

Safford Police Chief Joe Brugman discussed what the community could do to keep the park free from vandals and wrongdoers. He simply encouraged anyone who witnessed suspicious activity to immediately notify the police.

“Give us a call,” Brugman said. “That puts us back out at the park for a few minutes. If it looked suspicious but it turned out to be nothing, it’s OK. You’re not wasting our time.”

Brugman said even if the call turned out to be a misunderstanding, criminals would shy away because due to the police presence. When officers are called to an area, it usually deters the unlawful element. Brugman also stressed the importance of local neighborhood watches. He said individuals who keep an eye out in the community can be the biggest help to local law enforcement.

Dakota Barny, who lives adjacent to Glenn Meadows Park, said he hopes the renovation will change the feel and element of the park.

“It would be nice to see something that’s nice and pretty (to) see families (and) kids outside,” Barney said. “Instead of people out there causing problems and tearing up the bathroom, it would nice if it were a little community oriented.” 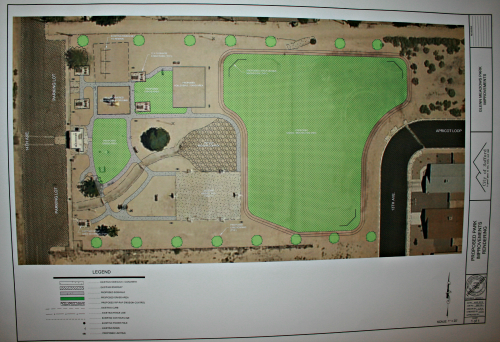 Brooke Curley Photo/Gila Valley Central: Shown above is a rough artist rendition for the park. Aspects of the design will change with the input of community members.