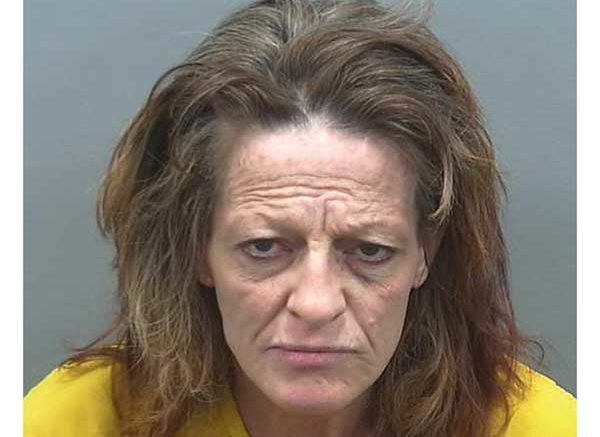 GRAHAM – Saturday, deputies were dispatched to a residence when a woman claimed that she had been assaulted by a man in the house. She reported she had locked herself in the bedroom but wasn’t sure if the man was still inside the home.

When authorities arrived as the residence, a man came outside who identified himself to the deputies. As other deputies made contact with the woman inside, the man stated that he had been playing solitaire on the computer when the woman came “un-glued”. He reported that she started throwing things and acting crazy. He recalled the woman having scissors in her hand but said she had not hit him and he had not hit her. He had heard things banging around.

Deputies spoke with the woman, who identified herself as, Shelly Rood. She appeared to be moving a lot and acting in a loud manner. She reported the man had hit her in the face, however, deputies did not see any mark where she showed them she had been hit. Deputies saw she had a black eye, but she reported it was from the other day. Due to her behavior, authorities asked Rood if she was on drugs and she answered that she was not. Officials asked if they could search the room and Rood gave permission. When a deputy noticed a backpack on the floor and picked it up to ask to search it, Rood got upset and told them it was her daughters, said they could not search it and demanded it be put back.

Authorities were informed that dispatch could not locate a “Shelly Rood” in the system. Shelly became upset when deputies asked for her social security number to help dispatch locate her in the system. Dispatch then found the name, Michelle Lockridge Rood with the same social security number. As deputies were speaking with Rood, she claimed they were attacking her. Deputies located a knife on the bed and while looking for any other weapons on the bed, discovered a broken glass pipe and a pill. Rood reported they were not hers and when the man was asked about the items found, he stated they were not his. The man told deputies the meth pipe in the room was Rood’s, that he knew her to have one wrapped in a black towel.

By this time deputies were made aware of Rood having a warrant and when they mentioned it to Rood, she reported she recalled the incident of why she had the warrant. Rood had requested water, so deputies had handcuffed her in front to allow her to have water. Rood had also complained of sickness so when medics arrived, deputies had a female medic search Rood due to her being under arrest. Rood had a glass pipe in a sock and a black towel like the man described on her, she also had a blue straw with foil in her pocket.

Deputies transported Rood to the jail. When they arrived and opened the door for her to get out, they noticed Rood’s wrist well above handcuffs to be bleeding. Rood’s glasses were broken on the seat. Rood’s glasses also had blood on them. Rood reported the handcuffs had cut her wrist, although deputies had seen they were not on too tight.

Rood was booked in the Graham County Jail.