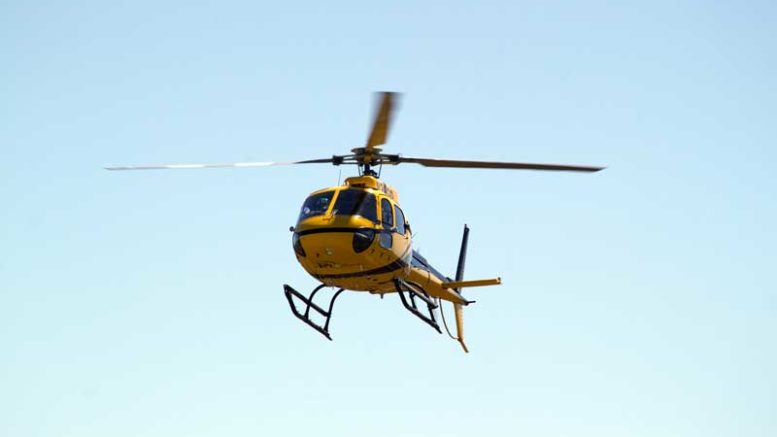 Jon Johnson Photo/Gila Valley Central: An Air Evac-21 helicopter like the one shown here was used to transport a rollover victim to a Tucson hospital early Monday morning.

GRAHAM COUNTY – The driver of a single-vehicle rollover south of Safford early Monday morning was airlifted to Banner-University Medical Center Tucson for treatment of a severe laceration to her head.

According to a report from the Arizona Department of Transportation, Kristina Marie Roloff, 55, of Safford, was northbound on U.S. Highway 191 in a red, 1990 Toyota 4-Runner at about 12:40 a.m. when, for an unknown reason, she veered off to the right side of the road and rolled the vehicle repeatedly.

The crash occurred just south of the Artesia area at about milepost 109, where the speed limit is still 65 mph.

Roloff and her passenger, Samuel East, 50, of Safford, both had on their seat belts, but Roloff somehow hit her head, causing the laceration.

Air Evac-21 landed at the scene and transported Roloff to the Tucson hospital. According to first responders, it appeared that Roloff didn’t suffer any skull damage but the laceration was very large.

The crash did not restrict traffic since the vehicle rolled off the road, and the Toyota was eventually towed from the scene.

According to the DPS, there was no indication of alcohol use. Fatigue may have been a factor in the crash, but Roloff did not give a reason for the crash.