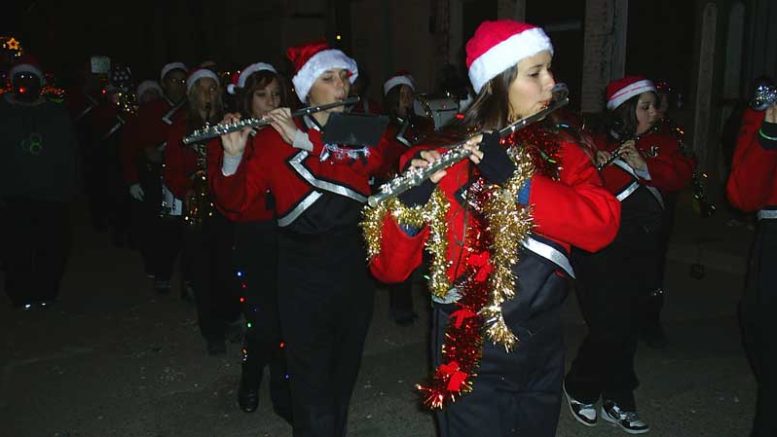 Photo By Gualterio Casias: Morenci High School marching band members march along the way as they play their instruments during the 2007 Festival of Lights Parade. The MHS Marching Band has a long history with the festival, which is in its 21st year. The award-winning band will participate in the Saturday, Dec. 2, 6:30 p.m. parade on historic Chase Creek in Clifton.

‘Pride of Wildcat Country’ has strong link to holiday event

CLIFTON – Morenci High School’s 2017 football season has ended and homecoming is now only a memory. So, does that signal the end of the MHS Marching Band’s public appearances? No, indeed, it does not.
The “Pride of Wildcat Country” will be participating this Saturday, Dec. 2, in the annual Festival of Lights on historic Chase Creek in Clifton. The Parade of Lights begins at 6:30 p.m.  It will be the 21st year of the event.
The MHS Marching Band has a strong connection with the festival. The band has appeared at all but a few of the festivals’ light parades. Any absence was due to a scheduling conflict, such as when the Wildcats participated in a statewide competition.
Spectators remark how the band adds a great deal to the event.
“They are definitely one of the Light Parade’s main attractions,” said Espie Castaneda, Clifton Town Clerk and a longtime member of the festival’s organizing committee. In fact, she has been one of the committee’s driving forces since the first festival in 1996.
“They bring with them a strong sense of community,” she said. “It’s nice having a marching band and in Morenci’s case it’s a matter of having an excellent one.” 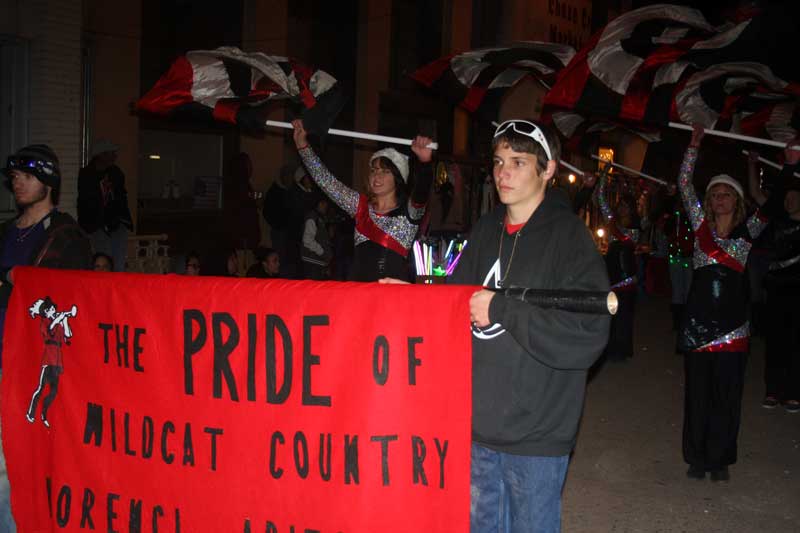 Photo By Gualterio Casias: A banner reading the “Pride of Wildcat Country” and cheerleading baton twirlers announce the arrival of the Morenci HIgh School Marching Band at a past Festival of Lights Parade on historic Chase Creek in Clifton. The celebrated, award-winning Wildcat band will be in the Parade of Lights this Saturday, Dec. 2. It is the 21st year of the festival and the band has has a strong history of participation. A festival organizer said the Wildcats’ band is always one of the parade’s main attractions and members carry themselves with ‘dignity and pride.”. The parade’s theme is “A Classic Christmas Cinema.”

Castaneda said, “Through the years band directors have always been willing to participate. I hope band members enjoy being in the parade as much as we enjoy having them. I think it’s wonderful they make such an effort that’s above and beyond the call of duty. The band is certainly one of the highlights of the parade.”

The MHS band is definitely “Excellent.” That has been proven again and again in various competitions the Wildcats have been in around Arizona.
“Our band very much exemplifies the “Pride of Wildcat Country,” said MHS Principal Bryan Boling. “We have a lot of pride in them and they do an outstanding job in representing not only the school and themselves but also the community.”
He said it is a “highly positive thing” for band members to be in an event such as the Festival of Lights. They gain exposure to community service groups, such as the Morenci Lions and the Greenlee County Search & Rescue team as well as other organizations and individuals.
He said band members have been practicing since August and everybody has put in “a great deal of hard work and effort toward becoming a proud unit. They take great pride in the way they play, how they look and how they march.” Boling lauded MHS Band Director Jared Collins for his “excellent” work with students.
“We’re glad to know the people who put the festival together and appreciate our kids’ participation,” Boling said. “I think our kids really enjoy it and our kids enjoy it very much.”
The festival begins at noon and includes a wide variety of delicious food and other vendors selling their wares. There will be musical performances throughout the afternoon. They include the Black Hills Band, the Sacred Heart/Holy Cross Children’s Choir and Friends. Bella and Teresa Campbell will present selected musical tunes as will Adrie Pierpont-Valenzuela.
A feature that should very much draw the interest of parents and other adults to the festival is a drawing for $500