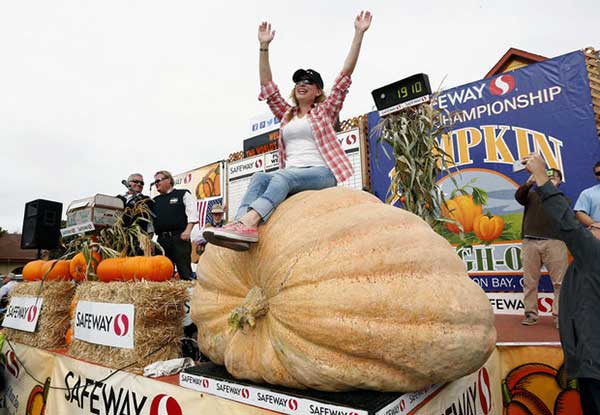 HALF MOON BAY, Calif. (AP) — An annual pumpkin-weighing contest in Northern California has a new winner: a third-grade teacher in Washington state who raised a giant one weighing 1,910 pounds.

Cindy Tobeck, 42, who lives outside Olympia, Washington, said her pumpkin grew steadily since she planted it in April, spending much of that time in a greenhouse with heated soil. She said the secret to growing giant pumpkins is using the right seed.

“I am just over the moon elated right now,” she said. “It was just a real steady grower. It wasn’t an explosive grower… it kept growing well into the summer when a lot of pumpkins slow down.”

Hers came from a 2,230-pound pumpkin that won a different contest last year.

Tobeck beat out more than two dozen other pumpkins from Oregon, Washington and California, said Timothy Beeman, a spokesman for the Safeway World Championship Pumpkin Weigh-Off in Half Moon Bay. The runner-up weighed 1,723 pounds. Tobeck was shy of the contest record by about 150 pounds.

On Sunday, the Giant Pumpkin European Championship was held in Ludwigsburg, Germany, and a pumpkin weighing about 2,623 pounds took home the award for the heaviest. If anyone would have broken that record they would have received a special $30,000 mega prize.