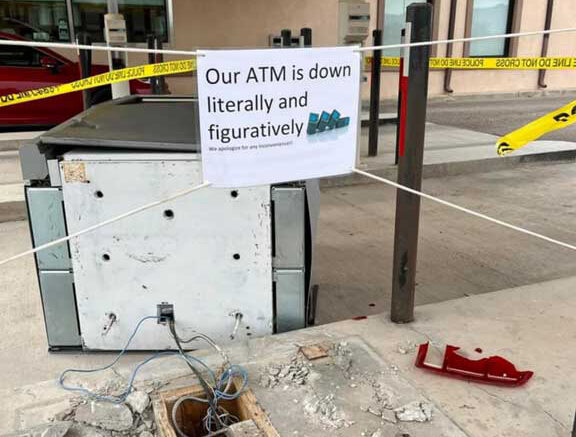 WILLCOX — Willcox Police are searching for the suspect in a vehicle theft and an attempt to steal an ATM machine.

The vehicle was stolen from a business parking lot on North Haskell Avenue on Monday, Sept. 6. The victim, who saw the suspect drive off, reported that the car was unlocked and the keys were in the ignition.

At about 3:22 a.m., the suspect pulled the stolen vehicle up to the Great Western Bank and attempted to pry open the ATM. When he failed, he then backed the stolen vehicle into the ATM, knocking it over, and was attempting to drag it away with chains when a Willcox Police officer and arrived on the scene.

The suspect then ran off and attempts to locate him by Willcox Police and Department of Public Safety officers have not yet been successful.

The Willcox Police officer said the suspect was a male, about 6-feet, 1-inches tall, and had a slender build. The suspect was wearing a complete face covering and gloves.

“Please lock and secure valuables, don’t leave vehicles open and keys within the vehicles, this includes house keys. Most criminals are opportunistic they commit crimes when the opportunity arises and are less likely to commit a crime if it is too burdensome. Criminals are criminals and will not hesitate to make a victim out of anybody, I implore you to not be an easy target,” Willcox Police Chief Dale Hadfield said in a prepared statement.