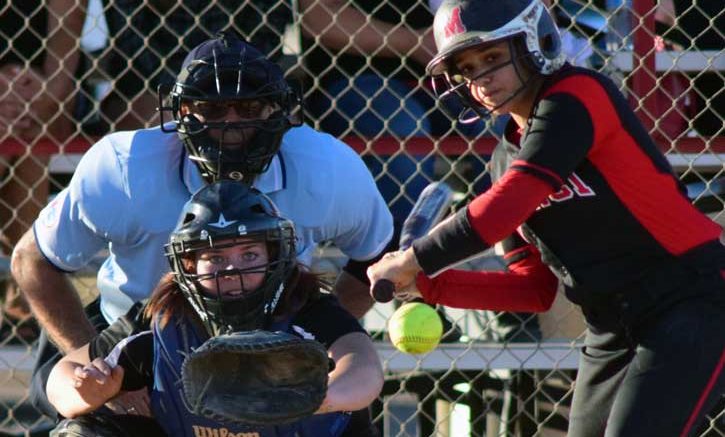 Photo By Raymundo Frasquillo: All eyes are on the ball as Morenci junior Destiny Apodaca tags a sixth inning full-count pitch for a single. She was driven in by a Sabyn Martinez single as the game with Pima was called on the 10-run rule March 14. The Wildcats won 12-2. Behind the plate are Pima senior catcher Karissa Causey and umpire John Figueroa.

Morenci (10-4-1 overall, 2-1 region) completed its second tourney as the consolation winners with a 10-5 Silver Bracket win over the 5A Phoenix Sunnyslope Vikings. The Wildcats topped the 4A Yuma Criminals 10-1 in five innings March 10, edged the 4A Peoria Panthers 6-5 in five innings and slipped past the 5A Phoenix Goldwater Bulldogs 7-6 in overtime March 11 en route to the consolation final.

The Wildcats succumbed by a run, 2-3, to the Bobcats in Benson for their initial region loss March 7.

Morenci opened the season with an 18-1 region home win over Tombstone on Feb. 25, and went 3-2-1 during the Safford tourney March 3-4. The Wildcats defeated the Miami Vandals 7-1, fell 2-4 to the Snowflake Lobos, edged Tucson Amphitheater 4-3, topped the Lakeside Blue Ridge Yellow Jackets 10-1, were blanked 0-4 by the host Bulldogs, and tied the Eagar Round Valley Elks 7-7.

Junior infielder Destiny Apodaca singled on a two-out, full-count pitch and was driven in by senior pitcher Sabyn Martinez to score the Wildcats’ 12th run, ending the game on the 10-run rule. 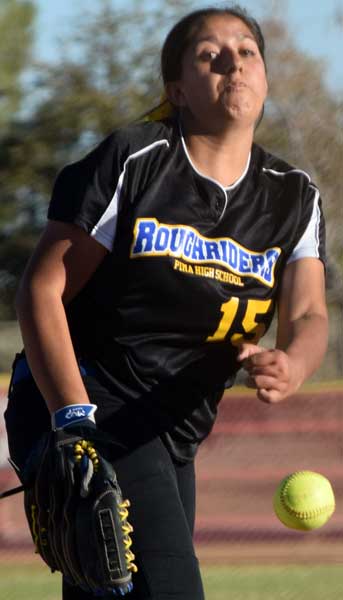 The Wildcats led 11-1 after four innings, but Pima freshman Melody Nevins singled on in the fifth and scored the Roughriders’ second run on a throwing error. The next three batters recorded outs and Morenci’s two-outs, bases-loaded fly out forced another inning of play.

Pima was retired in order as freshman reliever Angel Ontiveros stepped in the circle with two outs. She delivered a single pitch yielding a deep fly that was caught for the third out.

The Wildcats jumped out to a 5-0 advantage after a complete inning, sending 11 batters to the plate and leaving the bases loaded.

Pima countered with a run singled in by freshman pitcher Kylee Carbajal and the Wildcats added a pair of runs in each of the next three innings for a 10-run advantage.

In the circle, Martinez struck out 10 and yielded five hits while facing 23 batters during 5 2/3 innings.

Morenci turned a 3-run, two-innings deficit into a 7-run advantage, 10-3, after five innings and limited the Vikings to an additional two runs in the bottom of the sixth to account for all the scoring.

Morenci doubled the score in the fourth as the entire order went up and added four more runs in the fifth, with each of the nine batters taking another turn again. Six of the final seven batters recorded outs during the sixth and seventh.

In the fourth, Aguallo walked on four straight balls; a Gregory fielder’s choice forced Aguallo out, Castillo singled, Lee walked, Seballos walked to drive in Gregory, an Apodaca fielder’s choice forced Castillo out and a Martinez walk drove in Seballos in what proved to be the deciding run. An error allowed Chavarria to reach first with two outs and senior Caitlynn Blair’s fly out left the bases loaded.

Martinez struck out seven, walked one, beaned one, and allowed 10 hits while facing 30 batters during seven innings.

Due to time constraints, a 6-6 deadlock after six innings was decided by the meet tie-breaking rule. Each team had the last batter out, begin at second base. Since both teams scored once, the last two out began at second and third for another extra scoring opportunity. 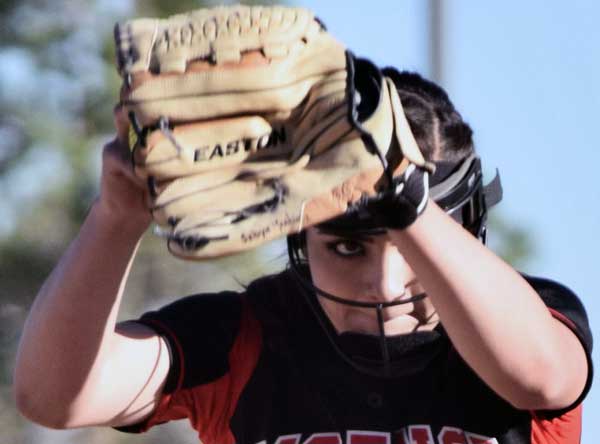 Goldwater loaded the bases on a bobbled third strike, the next batter flied out to the pitcher and a double play resulted as the runner at third was thrown out, and the last batter struck out.

Morenci took a 2-0 initial-bat lead, extended it to 5-1 after two innings, and the Bulldogs dispatched a 2-out, 2-2 pitch for a home run in the first and added two runs in both the third and fourth to tie at 5-5.

In the circle, Martinez struck out 10, allowed six hits, and walked one while facing 37 batters.

Trailing by a run after four innings, Morenci defused a Panthers’ one-out scoring threat with a pair of strikeouts in the top of the fifth.

In the bottom of the fifth, Martinez drew a walk, Chavarria was beaned, Aguallo reached first on a one-out error and Martinez came in to tie the score, and Gregory singled in Chavarria, the game-winning run.

A Martinez 3-run home run gave Morenci a 3-1 lead in the first inning, the advantage was 4-3 after two, and the Panthers went ahead with two in the fourth.

Herrera struck out three, gave up five hits, walked four, and beaned one while facing 25 batters during 4 1/3 innings. 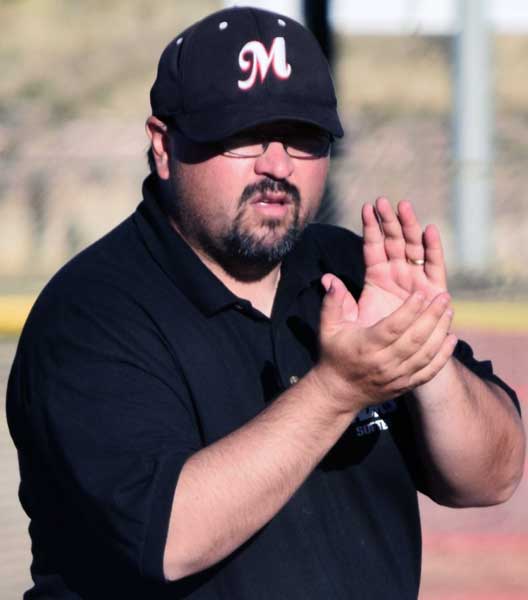 Photo By Raymundo Frasquillo: First-year Wildcats’ softball coach Joseph Garcia is the fourth for Morenci during 16 seasons of the program in the 21st century. He fallows James Hollestelle (2013-16), Christopher Aguallo (2005-2012), and Jaclynn Nabor (2002-04).

The Wildcats enjoyed a 4-0 advantage before the first out and led by six as the entire order stepped to the plate during their initial at bat. A one-out Martinez triple raise the margin to nine in the second and an Aguallo sacrifice fly gave the Wildcats a 10-0 advantage.

A total of seven batters took a swing in the first two innings for Yuma, resulting in a strikeout, a walk, four ground outs and a fly out before a one-out Mandi Padilla single yielded the Criminals only run. The sophomore advanced to second and third on errors and scored on a passed ball. Four of the next 10 batters did not advance past third base in the final 2 2/3 innings.

Freshman Sophia Gann gave up 11 hits, struck out three, and walked one while facing 26 batters in four innings.

Martinez sat the Criminals down in order through the first two innings of the early morning contest, with half of the outs being K’s, limited Yuma to four batters in the next two innings, and only one runner reached second base. She threw a one-hit shutout, walked two, and struck out five while facing 14 batters in four innings.

Morenci added two more runs in the second with six batters, and two in the fourth with four batters before the game was halted on the 10-run rule.

Junior Kayla Linares batted 1.000 (1-1) with a third-inning double for the Criminals.

The Wildcats were retired in order during the first three innings and limited to a lone run, singled in with two outs by Chavarria from a doubled Apodaca in the fourth.

Morenci erased a one-run deficit with three runs during their initial plate appearance, using three doubles to drive them in. Lead-off batter Shaunee Seballos was walked and driven in by Martinez, Aguallo doubled in Martinez with two outs, and Blair doubled in Aguallo. The bases had a beaned Heather Lee, Blair, and a walked Gregory as the third out was recorded, but the entire batting order had stepped to the plate.

The Wildcats would not need to score again as they held the Cardinals to one more run in the fourth, reaching first on an error and scoring on a ground out. The initial run in the first singled on and scored on a passed ball.

However, Morenci doubled its score, crossing the plate once during the second, third, and fourth innings.

The deciding run took four batters to score with two outs in the bottom of the seventh. A walked sophomore Abby Workman followed by a senior Cori Jackson’s double put both in scoring position. The next two batters grounded to third, but Workman reached home plate safely on the latter to end the game.

Morenci scored right out of the gate, crossing the plate with its initial two batters. Seballos singled on, Apodaca tripled her in, and a Martinez ground out allowed Apodaca to score. A two-out Lee single, coupled with a beaned Aguallo and a walked Gregory loaded the bases for Blair. She lined to third to end the threat.

The Wildcats went three up and three down during the second, third, and fourth innings. Apodaca singled on with two outs in the fifth and Martinez reached first on an error, but the next batter flied out for the third of four plate trips. The sixth opened with Lee’s bunt single and an Aguallo fielder’s choice bunt forced her out at second. The next two batters recorded outs. A one-out Seballos’ single plus a two-out Martinez walk set up another scoring opportunity in the seventh, however, a fly out resulted with the ensuing batter to douse the flame.

In the circle, Martinez allowed 10 hits, walked two, struck out one while facing 34 batters during 6 2/3 innings.

Sherman struck out five, gave up six hits, walked two and beaned one while facing 31 batters in seven innings.