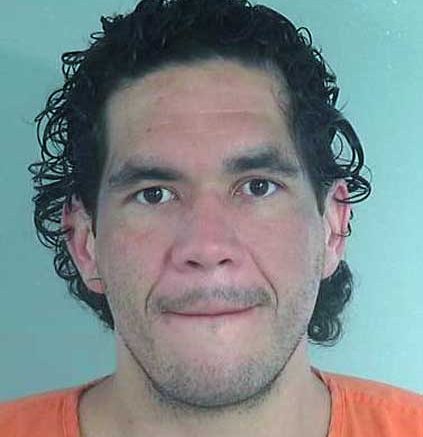 Contributed Photo/Courtesy GCSO: Jason Reyna was arrested and booked into jail for theft of means of transportation after allegedly stealing his uncle's SUV and crashing it through a utility pole.

GRAHAM COUNTY – The phrase “no good deed goes unpunished” was applicable to one Safford man after he let his nephew stay at his house only to have the visitor steal his SUV and crash it through a utility pole.

Jason Mark Reyna, 36, was arrested and booked into the Graham County Jail on March 13 for theft of means of transportation.

Earlier that morning, at about 2:23 a.m., a deputy responded to a residence on E. San Jose Road regarding the theft of a maroon, 1998 Chevrolet Tahoe. The owner said he had let his nephew, Jason Reyna, stay with him. He believed Reyna took the vehicle without permission at roughly 2 a.m., possibly to travel to where his girlfriend lives in Morenci.

At about 6:24 a.m., deputies were dispatched to the Motor Vehicle Department at 310 W. 6th St. regarding the stolen SUV being in its parking lot. Surveillance footage from a bank’s ATM shows the vehicle being parked in the lot at about 2:46 a.m. and a person leaving the SUV at 2:56 a.m.

The owner of the vehicle told officers that his daughter showed up that morning with the keys. She advised that Reyna had showed up at her house at about 4:30 a.m. and told her he had stolen the SUV and crashed it.

The woman said that after stealing the SUV, Reyna struck a utility pole, severing the pole into two pieces. After the crash, he drove the vehicle to the MVD and then walked to her residence in the Copper Canyon subdivisions in eastern Safford and gave her the keys.

A Safford officer retrieved debris from the utility pole crash scene at 416 W. 3rd St., including part of a headlight that matched up the damage to the Tahoe at the MVD.

Reyna was located on Hollwood Road near the rear of the Copper Canyon subdivision and was taken into custody without incident. He refused to speak about the theft and crash without a lawyer present and was booked into the jail.