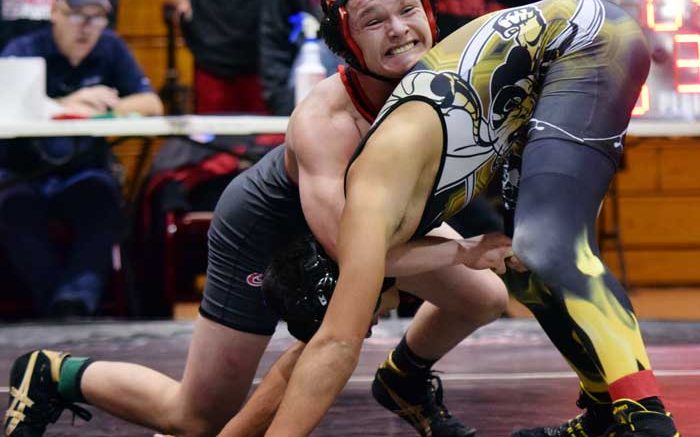 Photo By Raymundo Frasquillo: Morenci senior 152-pounder Kyle Sarret tries for an advantage over Tombstone’s Anthony Zazueta in a season opening match. Sarret posted a 16-6 major decision, and Morenci got a 76-0 dual win en route to a 4-0 record Nov. 30.

Sixteen student-athletes earned the privilege of representing their school in the season opening wrestling meet Nov. 30. They did not disappoint the Wildcat Memorial Gymnasium crowd.

Morenci outscored its four opponents by a combined 284-18 in duals, topping the Tombstone Yellow Jackets 76-0, the San Manuel Miners 70-12, the San Carlos Braves 72-0 and the Benson Bobcats 66-6.

The Wildcats posted a combined 21-2 record in head-to-head bouts, winning 15 by fall (pin), three by technical fall (15 or more points), two by major decision (8 or more points) and one by decision (1-7 points). The losses were both by fall. Morenci also received 29 forfeit wins and yielded one by not having a full team, and there were three double forfeits which gave points to neither team. Ten Wildcats each went 4-0, one 3-0, three 1-0, one 3-1 and one 1-1.

“I was pleased with the effort and intensity, (but) there’s room for improvement,” Morenci fourth-year head coach Casey Woodall said. 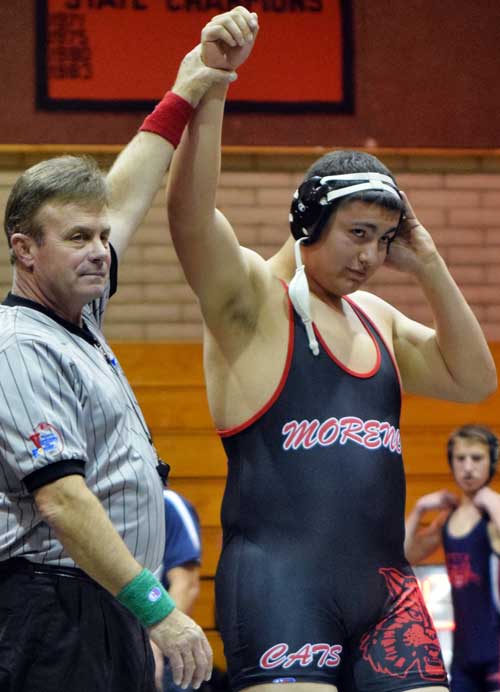 The Benson Bobcats, the Thatcher Eagles and the Globe Tigers each posted 3-1 records; the San Manuel Miners, the Tombstone Yellow Jackets and the Miami Vandals were each 1-3, and the San Carlos Braves went 0-4.

Did Morenci’s wrestling program rebuild or reload for this season? It may be too early for the question to be answered. The Wildcats next home meet is a dual with Safford on Dec. 29.