Photo By Raymundo Frasquillo: Morenci 195-pound senior Christian White, right, faces off against Pima senior Hadley Schmidt in the section final Feb. 4. White pinned Schmidt in 5:31. The pair met again in the state final with White pinning Schmidt in 1:41 to earn a third consecutive state title, the school’s 57th overall, the first at 195, the 14th with an undefeated record, the 15th multiple champion and the 28th as a senior. From 2015-17, White posted a 19-0 record with 18 pins for the combined three section and three state meets. 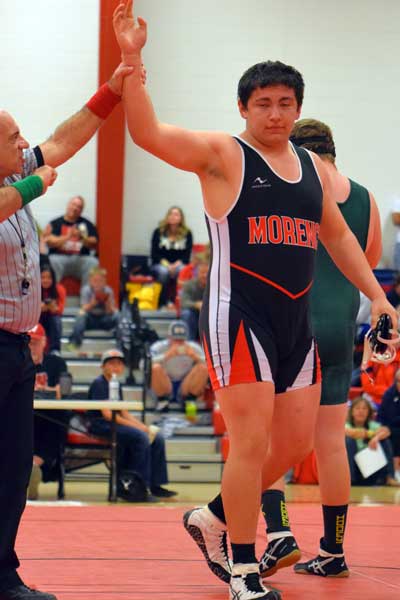 Numerous hours of hard work and sacrifice culminated with the Woodall-coached Wildcats earning their second back-to-back state championship Feb. 10, the seventh overall since 1999, and the second under its current fourth-year head coach.

“It was really something,” Woodall said. “We didn’t tell anyone. They already knew what we had done.”

Before classes were dismissed Friday afternoon, through technology available in the classroom, the entire student body was aware seven of its members were finalists and two would be vying for third or fourth place. The last round was scheduled for later that evening in the Prescott Valley Events Center.

“My phone was burning up from all the texts I was getting during the final round,” Woodall said. “Former wrestlers and alumni were watching the finals and sending me messages.”

Cota pinned Winkelman Hayden sophomore Omar Lopez in 1:10 during the first round, decisioned Camp Verde senior Wes Phillips 14-8 during the quarterfinals and Round Valley senior Dylan Workman 8-6 during the semifinals and posted a 16-6 major decision over St. Johns sophomore Kaiden Smith for the title.

Photo By Raymundo Frasquillo: Morenci sophomore Mark Roybal earned the 132-pound title with a 7-6 decision over a senior.

White pinned Round Valley freshman Colten Knight in 29 seconds during the first round, posted an 18-3 technical fall over Heber Mogollon senior Keola Yazzie during the quarterfinals and pinned St. Johns junior Diego Hernandez in 1:00 during the semifinals and Pima senior Hadley Schmidt in 1:41 during the final.

Arbizo pinned Whiteriver Alchesay sophomore Cesario Hernandez in 22 seconds during the first round, Joseph City senior Ben Spurlock in 3:45 during the quarterfinals, Fountain Hills senior Parker Kuffman in 3:53 during the semifinals and Winslow junior Ahli Foster in 3;40 during the final.

Derek Waltrip pinned Joseph City junior Jesse Hulsey in 49 seconds during the first round and Eloy Santa Cruz freshman Ray Belloc in 1:14 during the quarterfinals, decisioned Mogollon senior Myron Crank 8-1 during the semifinals and was pinned by Camp Verde junior Skylar Pike in 5:38 during the final.

Gonzalez pinned Mogollon sophomore Elisha Begay in 36 seconds during the first round, posted a 12-3 major decision over Fountain Hills senior Kainoa Reid during the quarterfinals, decisioned Yuma Catholic junior Richard Molina 3-1 during the semifinals and was decisioned 4-10 by San Manuel senior Franky Renteria in the final. 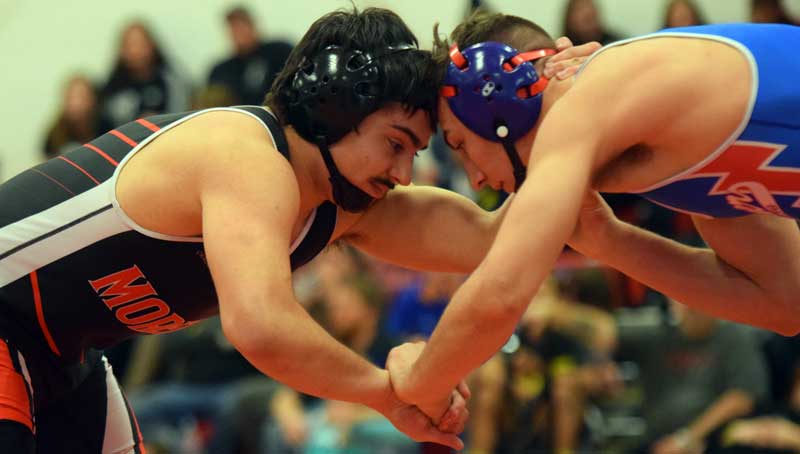 Photo By Raymundo Frasquillo: Morenci senior Frankie Gonzalez, left, fell to San Manuel senior Franky Renteria in the section finale during the closing seconds. The pair met for the state finale with Renteria gaining the title on an 11-4 decision.

Carrasco pinned Many Farms senior Ryan Bitsui in 32 seconds during the first round, chalked up a 20-6 major decision over Wickenburg senior Ethan Lamb in the quarterfinals, was pinned by Saint Johns senior Trent Sherwood in 5:54 during the semifinal and decisioned Winslow senior Brayden Garcia 6-2 during the consolation semifinal and Coolidge junior David Marquez 8-4 for third place. 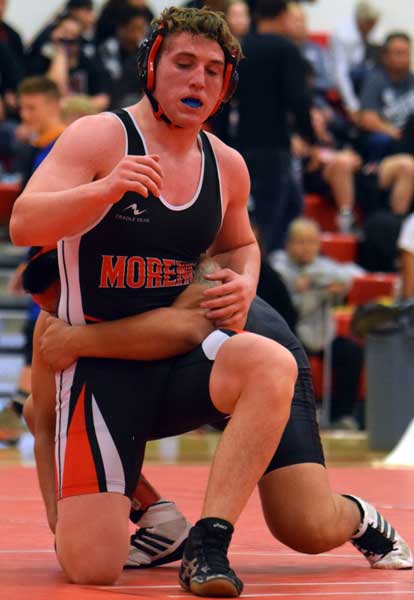 Photo By Raymundo Frasquillo: Section third placer Nathan Willey did not place at state, forfeiting two matches to be eliminated.

Willey forfeited to Round Valley John Stokes during the first round and to Phoenix Christian senior Dorean Gardner during the consolation first round.

St. Johns had eight placers, two champions in freshman Tanner Crosby (106) and senior Dawson Avila (145), two runners-up, a third, a fourth, a fifth, and a sixth.