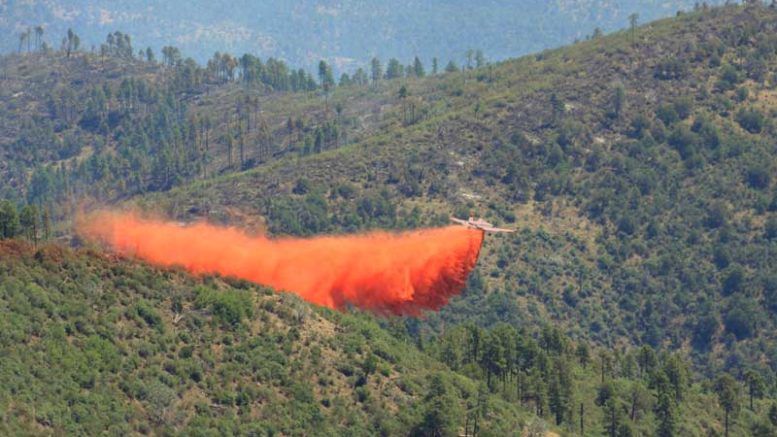 Contributed Photo/Courtesy White Mountain Zone Type 3 Incident Management Team: A Single-engine Air Tanker makes a fire retardant drop over the SH Fire north of Morenci. The Forest Service has allowed the fire to clean up the area from a previous fire while keeping it in check with water and retardant drops.

GREENLEE COUNTY – A section of the Coronado Trail (U.S. Highway 191) is currently closed due to the SH Fire, but wait, there is much more to the story than the road closure. This fire is actually doing some good for the forest.

The SH (short for Stray Horse Creek) blaze is cleaning up destruction created by the Hot Air Fire of 2008.  Forest Service personnel are allowing the fire to take its natural course, according to Nate Suida, assistant forest management officer with the Clifton Ranger District, which is part of the Apache-Sitgreaves National Forests system. The Apache Forest encompasses about two-thirds of Greenlee County.

At present, the major concern is keeping the fire away from the highway and the Rose Peak Lookout tower.

There are some aerial bombardments of fire retardant from a SEAT airplane (Single-engine Air Tanker) and large buckets of water are being dropped by helicopter. There are also firefighting personnel on the ground.

Suida described it as “a low intensity fire that is cleaning up the forest floor and letting the fire take its natural course.”

He said the fire is in a very steep and rugged area and it is not threatening anything of value, such as property, homes or campgrounds. Neither is the fire creating any “crowning” among the trees that exist. Crowning occurs when a fire reaches the tops of trees and quickly spreads. It is one of the most dreaded aspects of fighting a forest fire and makes it all the more difficult and dangerous to keep a fire contained.

The SH Fire was started by lighting June 27 and as of Sunday morning, July 9, the fire had burned 3,048 acres with 40 percent containment. The acreage decreased from Saturday’s estimate due to more accurate mapping. There were also 183 Forest Service personnel involved. Suida said firefighters are focusing on keeping the fire east of U.S. Highway 191 along with protecting the Rose Peak lookout facility. Brush, grass and anything flammable are being removed from along the highway and around the lookout.

At present, the highway is closed from mileposts 201 to 225, the Blue Vista Lookout. The lightning-caused fire began June 27 and according to a Forest Service news release the estimated containment date is July 25. Forest Service personnel concerned that the possibility of thunderstorm activity could result in gusty, erratic winds closed the highway for the safety of motorists.

Those who usually take The Coronado Trail to Alpine and Luna, where several people in the Clifton area have summer cabins, camp out or go fishing at Luna Lake, may reach their destinations by going through New Mexico via Arizona State Route 78, over Mule Creek Pass and into New Mexico, where the highway there runs through Glenwood and Luna, which is a short distance from Alpine.

Suida said that the way the SH Fire is being handled is a much different approach than that of the past in that nature is being allowed to take its course. He told of how for the past century forest firefighting  called for immediate suppression of a fire, which in many cases has proved “unhealthy.”  Over about the past 25 years, the approach has changed to allow some fires to go their natural way.

“Historically, this is what fires would do,” Suida said. “Forests have evolved with fire. Within the last 100 years we got pretty good at putting fires out quickly. We’ve learned that suppression (can be) unhealthy.”

He emphasized a positive aspect of the SH Fire as cleaning up the damage caused by the Hot Air Fire. The current fire is ridding the area of debris, such as dead and fallen trees and brush.   Suida said the fire is also healthy for the area in which it is burning as it adds nutrients to the soil that will help result in new growth, including grass on which wildlife can feed.

Preparations for burnouts continue along U.S. Highway 191 as firefighters continue to mop up in that area. Additionally, helicopter drops were utilized to slow the fire’s progression toward the highway to the north and to Rose Peak to the south. On Sunday, fire crews worked on constructing hand lines on the southwest portion of the fire to prevent it from heading into Rose Peak.

A particular difference in the SH Fire is that it is not creating dark smoke as would be the case in a large and highly destructive fire. The smoke from the current fire is emitting white smoke.

As is the rest of Arizona, which is experiencing excessive heat conditions, Suida said rain would be oh so very welcome.

More information on the SH Fire can be obtained online at inciweb. The website also has information on other fires burning in Arizona and across the U.S.