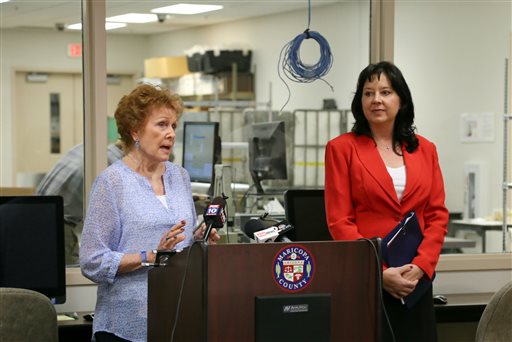 PHOENIX (AP) — Dozens of voters and activists upset about long lines and delays at polls during Arizona’s presidential primary vented their anger Monday at a state House hearing and later in the chamber gallery where a protester was hauled out in handcuffs by state police.

Earlier, the top election officials in Arizona and its largest county took responsibility for the problems last week that led Democrats to ask for a federal voting rights investigation into whether poor and minority voter were disproportionately affected.

The angry crowd descended on the House Elections Committee as it heard testimony about a decision by the state to cut funding for polling places that saw the number drop in Maricopa County — the home of Phoenix and most of the state population — from about 200 in 2012 to just 60.

A number of angry voters testified at the packed hearing and erupted in cheers as speakers called for reforms in Arizona’s election system.

After the panel adjourned without hearing testimony from everyone who wanted to speak, Democrats invited them up the House gallery, where things got heated.

“People were overexcited, if you will, and they wanted to make sure their voices were heard,” said Democratic Rep. Jonathan Larkin. “And it was the decision of the majority party here to not let testimony continue.”

State police spokesman Capt. Damon Cecil said one man was arrested for trespassing after the chanting crowd in the gallery disrupted other House proceedings. He refused to leave and laid down on the floor, where officers put him in handcuffs and carried him away.

Secretary of State Michele Reagan also accepted responsibility but said she didn’t have an issue with Purcell’s decision at the time it was made and didn’t have the authority to request changes even if she had seen a problem.

“I believe we’re all in this together, absolutely, and I take responsibility for the fact that election officials did not pull off the election that voters expect,” Reagan said in advance of a House Elections Committee hearing on the voting fiasco.

Purcell said she based her decision in Maricopa County on previous voter turnout, the number of people who vote by mail using early ballots, and how many were expected to physically go to the polls.

“I can’t go back and undo it. I wish I could but I cannot,” Purcell said during the hearing. “I made a giant mistake.”

“And that’s an understatement,” replied Republican Michelle Ugenti-Rita, who chairs the elections committee.

Purcell put part of the blame on the Legislature, which failed to fully fund counties’ costs to run the election. Other counties didn’t have the problems that emerged in Maricopa County, Ugenti-Rita said.

Phoenix Mayor Greg Stanton, also a Democrat, has asked for an investigation by the Department of Justice.

Democrats and civil rights proponents have said Purcell’s decision amounted to voter suppression, and added to perceptions that have been bristling for years that state leaders want to make it harder for Democrats, whose numbers include many minorities, to vote.

Previously, at the hearing, speaker Patrick Seifter and others called on Purcell to resign.

“You made sure that many people had to choose between voting and keeping their jobs,” Seifter said of the long waits at polls.

Activist Randy Parraz fired up the crowd as he loudly criticized committee members over a bill just signed into law that makes it a felony for someone to collect another person’s early ballot for delivery to a polling place.

Speakers also complained about the reporting of election results while voters were still in long lines hours after the polls had been scheduled to close.

The Associated Press and other news organizations reported on the early returns and determined Clinton and Trump had won. The results were announced more than an hour after the scheduled closing time.

“I think that needs to be a part of the overall discussion,” Ugenti-Rita said.

Reagan said she understood the frustration of voters hearing results while waiting in line.

“One is that the AP called the races, I’m not going to take responsibility for that,” she said. “They called it because they were doing math.”

Attorney General Mark Brnovich last week called for a change in the law to prevent elections officials from releasing any results if anyone remains lined up to vote.