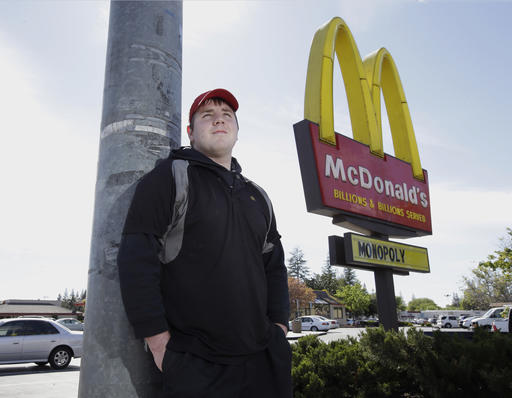 In this photo take Tuesday, March 29, 2016, Nathan Howard, 20, poses outside the suburban McDonalds that he works at in Rancho Cordova, Calif. California state lawmakers are expected to vote, Thursday, on a proposal to gradually raise California's minimum wage to a nation leading $15 an hour by 2022. Howard, who said he makes $10.25 an hour, says he would benefit from the raise, but opponents of the bill say it will further harm California's already poor business climate. (AP Photo/Rich Pedroncelli)

SACRAMENTO, Calif. (AP) — California state lawmakers are poised to enact the nation’s highest statewide minimum wage on Thursday, with gradual increases to $15 by 2022.

Gov. Jerry Brown and Democratic legislative leaders are promoting the boost as a matter of economic justice, and as an example to a nation struggling with a growing divide between rich and poor.

“There’s no doubt in this country the gap between the better off and those that struggle at the bottom of our economic world has grown bigger and bigger, and it is quite incredible that there is so much power, so much wealth, and so many people struggling,” the Democratic governor said as he unveiled his agreement with labor unions. “You’ve got a Congress that doesn’t get it, that’s so out to lunch….”

But opponents said the planned votes in the Assembly and Senate will further harm California’s already poor business climate. Economists, meanwhile, warned that some low-wage workers will lose their jobs, even as others see higher paychecks.

It would have a ripple effect for those earning near the minimum, according to the University of California, Berkeley, Center for Labor Research and Education, increasing pay for 5.6 million Californians by an average of 24 percent. Nearly all the affected workers are at least in their 20s, researchers found, and nearly three-quarters are in their 30s or older. More than a third are parents, and Latinos would benefit most because they hold a disproportionate number of low-wage jobs.

The right-leaning American Action Forum countered with its own projection that the increases could cost nearly 700,000 jobs

Businesses with 25 or fewer employees would have an extra year to comply. The governor could delay annual increases in times of budgetary or economic downturns. Wages would increase to keep up with inflation after 2023.

Democrats need only majority votes to send SB3 to Brown, and they control majorities in each legislative chamber.