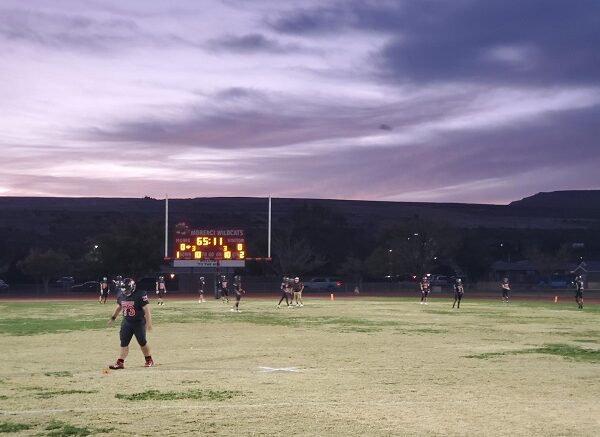 The Morenci Wildcats warm up prior to their game against Willcox.

GILA VALLEY — It doesn’t seem like 10 weeks ago the high school sports season started but it was and now that means the postseason is upon us. 2A and 3A football as well as 1A-3A Volleyball will start play in their championship tournaments this weekend.

The Fort Thomas Lady Apaches won the 1A South Region Championship and boast a 16-1 record and will take a 12 match winning streak into the state championship as the #5 seed. They will open with #12 Desert Christian who won the 1A Tucson region. The game is set for 11am November 5th at Coronado High School Gym B.

The Pima Lady Roughriders are headed into the 2A tournament as the #5 overall seed. They are winners of the 2A East with a perfect 10-0 record. They will face-off with #12 Kingman Academy. The Tiger finished 3rd in the 2A West and defeated Madison Highland 3-0 in the play-in round. The game is November 6th at 11am at Mountain Ridge High School Gym B.

The Morenci Lady Wildcats will be the #11 seed in the 2A tournament. They finished 2nd in the 2A East with an 8-2 record. The defeated Benson 3-0 in the play-in game. The ‘Cats will take on #6 Veritas Prep in the opening round. The Falcons finished third in the 2A Metro. This is a 1pm game on November 6th at Mountain Ridge High School Gym B.

Thatcher drew the #3 seed in the 3A Tournament. They won the 3A South Central with a perfect 10-0 record. They are riding a 12 match winning streak and haven’t lost a set in a regular season game since September 23rd. The will draw the #14 seed Odyssey Institute who won the 3A West and defeated Yuma Catholic in a 5 set marathon in the play-in game. This game will be played at 1pm on November 6th at Marcos De Niza High School Gym A.

Thatcher is the #10 seed in the 3A playoffs and will travel to #7 Pusch Ridge Christian for the second time in three weeks. The Lions beat Thatcher 41-14 on October 22nd to win the 3A South Championship. Both teams picked up wins in their final week of the season.

Bob Park has the Safford Bulldogs in the playoffs in his first year at the helm. Safford will be the #14 seed and travel to #3 Valley Christian. The two teams met October 1st in Safford with the Trojans winning that one 48-27.

Morenci heads into the 2A tournament with momentum after a 33-19 win over Pima in the regular season finale. They are the #4 seed and will host #13 Alchesay. The Falcons finished 2nd place in the 2A Little Colorado and secured their playoff spot with a 38-35. Morenci Sophomore Michael Casillas is the 3rd leading rusher in the state with 1547 yards on the season.

#8 Willcox will host #9 Holbrook. The Cowboys finished the regular season 7-2 and in 4th place in the 2A San Pedro. The Roadrunners won the 2A Little Colorado and have scored more that 50 points in five games this season.