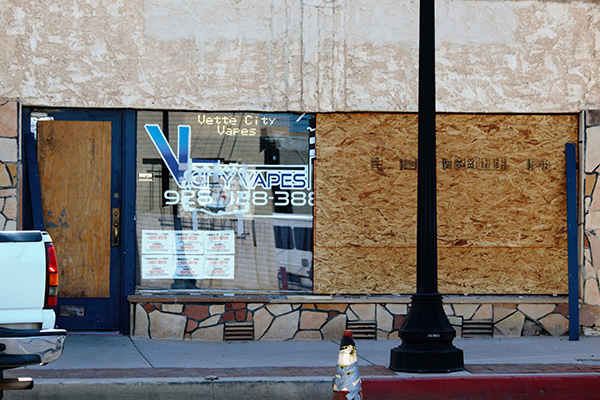 SAFFORD – A brazen early-morning burglary has cost a local business nearly $12,000 in damages.

Authorities were dispatched to Vette City Vapes at 515 S. 5th Ave. at about 7:41 a.m. on Sunday regarding a burglary. Upon arrival, the officer noticed the store’s two large windows and a window in its door had been broken. He also noticed two large rocks inside the store, which apparently had been used to break the windows.

The owner of the store, Kelley Wales, was then notified. She reviewed surveillance footage which showed a man break into the store at 6:19 a.m., remove a box from a back room and fill it with merchandise before making his exit. The man was later identified through a previous booking photo as Manuel Ray Arrellin Jr., 35.

Arrellin had already been in police custody the previous night for an unrelated incident regarding drug and weapons charges and was taken to Mt. Graham Regional Medical Center to be medically cleared to be booked into jail. However, Arrellin reportedly had left the hospital that morning at 6 a.m., despite still being wanted by police. Authorities were not notified he had left the hospital until 6:30 a.m., according to a police report, and were not successful in locating him.

After viewing the surveillance footage, an attempt to locate Arrellin was issued.

The following day, Wales gave an estimate of the damage and stolen goods. She reported the cost to replace the windows was $2,029.22 and the stolen items include $3,014 worth of vaping liquid, an iPod with case and charger valued at roughly $452 and another $6,167 in lost equipment. 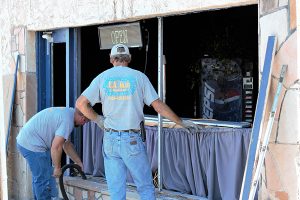 Wales, an electrical engineer by trade, opened up Vette City Vapes in April, 2014. She moved to her current location in October the same year. Vaping is the act of heating a liquid through an atomizer so the user can inhale vapor. The liquids generally consist of propylene glycol or vegetable glycerin along with nicotine and comes in a variety of flavors.

Wales said she initially opened up her vape shop because she saw the struggles her mother had while trying to quit smoking. She said her electrical background helped her discover an optimal device and delivery system that, combined with juices with nicotine customized for each smoker, helped people stop smoking combustible cigarettes at a better rate than those who just purchased electronic cigarettes at drug stores or gas stations.

“We just help people stop smoking,” she said. “Part of our goal is to get people down to zero nicotine. We’ve helped hundreds of people in the Gila Valley quit smoking, and I’m really proud to say that a lot of them do not vape (nicotine) at all anymore.”

A felony warrant for Arrellin’s arrest was issued out of Justice of the Peace Precinct 1 for missing a scheduled court date regarding charges of possession of a dangerous drug, possession of drug paraphernalia, theft of a firearm and misconduct involving weapons. His bond was listed at $10,000.

Anyone with information regarding the stolen items or Arrellin’s whereabouts is encouraged to call the Safford Police Department at 928-432-4100 or Graham County Dispatch at 928-428-0808.

At least $1,500 in stones and gems stolen in home burglary