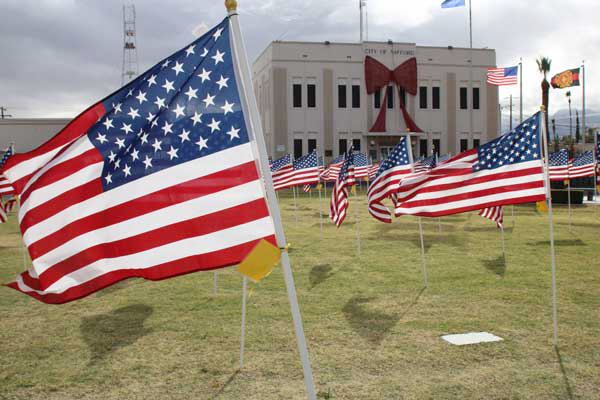 SAFFORD — Celebrations of the service and sacrifice of America’s veterans will take place throughout the week.

The Safford Field of Honor gets things started. Running Nov. 9-16, the Field of Honor is comprised of American flags placed on the Safford City Hall lawn, one flag for each veteran nominated by a resident of the Gila Valley.

On Wednesday, Nov. 11, at 11 a.m., American Legion Swift-Murphy Post 32 will conduct its annual Veterans Day memorial service on the steps of the Graham County Courthouse.

The ceremony is a chance to remind the public of the sacrifices made by members of all branches of the armed services, and show support for those in active duty.

On Thursday, Nov. 12, at 11 a.m., the Associated Students of Eastern Arizona College will conduct a Veterans Day ceremony, on the west side of the Student Activities Building at the flagpole.

Remarks will be given by Bethany Lamb, a current EAC student and veteran and Arizona Veterans Advisory Commission member Chris Gibbs, will be in attendance. The EAC Marching Band will also perform patriotic music.

Veterans Day started in 1919 as Armistice Day, celebrating the end of the Great War (World War I). In 1938, Armistice Day became a legal holiday.

In 1954, Armistice Day was changed to Veterans Day to honor veterans of American conflicts and, in 1968, it was moved to a Monday in October to create a three-day holiday weekend.

In 1975, President Gerald Ford signed into law the requirement that Veterans Day always be celebrated on Nov. 11.