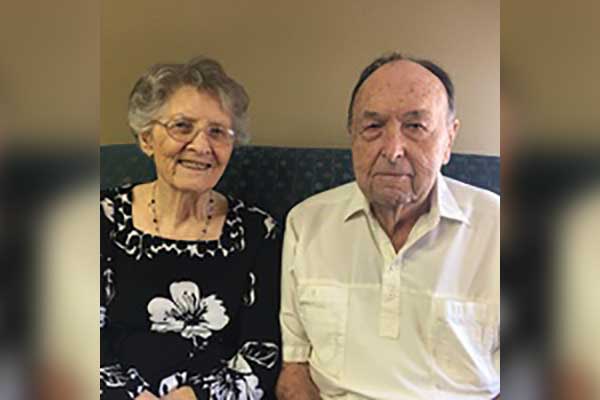 Vergie and Jay were both native Arizonans. Vergie was born in Phoenix, on January 5, 1929, to parents Garnet Vergie McEuen Vest and Arthur Elmore Vest. Vergie spent her early years in Chandler, then Blue River and Bonita, where her mother taught and served as Principal at the two-room school. The family later moved to Duncan, where Vergie graduated from High School as Salutatorian and then enrolled at the University of Arizona.

Jay was born in Glenbar, December 17, 1925 to parents Meredith Jay (M. J.) Ferguson and Rose Emily Snyder Ferguson. Jay was the oldest of three boys who grew up in a house next door to the Ferguson Mercantile Store and Ferguson Farms in Glenbar which was owned and operated by their parents. Jay graduated from Pima High School in 1942 and enlisted in the United States Army in December of 1943, serving as a pilot and mechanic where he earned the American Theater Service Medal, WWII Victory Medal and a Good Conduct Medal. He was Honorably Discharged in 1945 and enrolled in the University of Arizona.

Vergie and Jay met and became engaged while attending the U of A. They were married in Safford, AZ, on June 11, 1947, and lived in Tucson while Jay finished his studies in math and chemistry. The newlyweds lived in Polo Village in a Quonset Hut – the housing for students and veterans attending the University — on the site of what is now the University Medical Center.

After the birth of their first child, Pamela, they moved to Safford to operate Ferguson’s Firestone Store. Two more children, Steven and Melissa, were born in Safford.

In 1968 they moved to Flagstaff and during the next 35 years, Jay worked for Black Mesa Pipeline Company, then NAU, as a pilot, and was active in the Kiwanis Club. Vergie was an administrative assistant in the Department of Music and later the Department of Modern Languages at NAU. She was ordained as Deacon in the Episcopal Cathedral in Phoenix in November 1992. She served as Deacon at the Church of the Epiphany in Flagstaff and later at St. John’s Episcopal Church in Globe, when the couple retired near Roosevelt Lake (and later in Globe). For the last 10 years, Vergie and Jay have lived at the Beatitudes Campus in Phoenix.

The family is grateful to the staff at the Beatitudes Care Center and to Hospice of the Valley for their loving care and support during these very difficult months.

A Celebration of Life honoring Vergie and Jay will be conducted Saturday, December 1, 2018, at 10:00 a.m., at the All Saints Episcopal Church in Safford. Concluding services will follow in Safford Cemetery. Military honors for Jay will be conferred by the Gila Valley Veterans Honor Guard.

The family suggests memorial donations in honor of Vergie and Jay be made to the Beatitudes Foundation, 1650 West Glendale Avenue Phoenix, Arizona 85021.