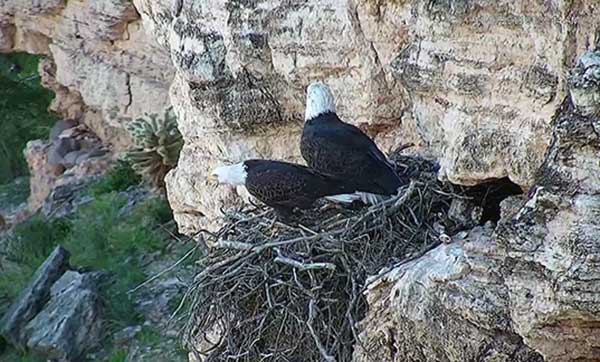 PHOENIX — Arizona wildlife watchers will be in for a special treat when the bald eagle nesting season begins. The Arizona Game and Fish Department and its conservation partners will launch a new “eagle cam” sometime in mid-December.

A local news channel inadvertently gave Facebook viewers a sneak peak of the new eagle cam that won’t officially launch until the seasonal closures of bald eagle nesting areas begin in the next few weeks. The closures typically last until late spring or early summer.

The public is asked to please not approach bald eagle nests and closure areas during the nesting season. Any disturbance of the nest, including nearby human activity, may cause the eagles to abandon it and not breed. Also keep in mind that disturbing bald eagles or other migratory nesting birds is against federal law.

While waiting for the eagle cam to be officially launched, wildlife watchers are invited to view other live wildlife camera offerings at https://www.azgfd.com/wildlife/viewing/webcamlist/. The sandhill crane cam will be of particular interest, as migrating cranes arrive in Arizona and stay until leaving in the spring for their northern nesting grounds.