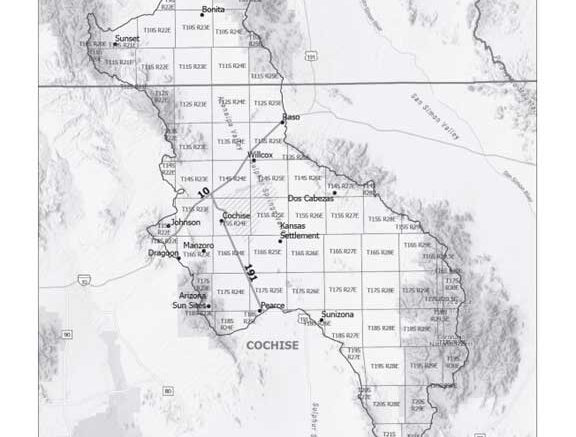 BONITA — Prop 401, which asks voters to affirm or overturn a Graham County Board of Supervisors decision to re-zone two greenhouse complexes in Bonita to allow for the growing of medical-grade cannabis, isn’t the only proposition on the ballot for a small group of Graham County voters.

Graham County residents in Bonita and Sunset will also be asked whether or not the Willcox Groundwater Basin should be under an active management area.

An AMA regulates the access and withdrawal of groundwater, as well as set conservation measures and monitors impact from wells.

Limits are already being felt — once a call for election has occurred, no land may be irrigated unless it was being legally irrigated during the five years preceding the call for election. That limit will remain in place if voters affirm an AMA or be removed if voters reject an AMA.

Active Management Areas allow for landowners to use a well for non-irrigation purposes, as long as the well has a maximum pump capacity of 35 gallons per minute or less and a permit has been obtained from the Arizona Department of Water Resources.

There are some exceptions to the limits, specifically on certain areas with grandfathered water rights, and for land owners who have made substantial capital investment within the five-year time frame.

There are currently five Active Management Areas in the state — Phoenix, Tucson and Prescott; and Pinal and Santa Cruz counties. There are also three Irrigation Non-expansion Areas — Douglas, Harquahala and Joseph City.

In the publicity pamphlet detailing the proposition, there are five letters of support for an AMA, including one from the Arizona Water Defenders political action committee.

There are 17 letters in opposition, from individual farmers and vineyard owners, as well as the Rural Water Assurance political action committee, the Cochise Graham Wine Council (also known as Willcox Wine Country) and the Arizona Wine Grower Association.

By contrast, in the publicity pamphlet for Proposition 401, there are 27 letters supporting a yes vote on Prop 401 compared to just one letter calling for a no vote, coming from the chairman of the committee that gathered signatures to put Prop 401 on the ballot.

The Willcox Basin includes Bonita and Sunset in Graham County, as well as Willcox, Kansas Settlement, Dragoon, Sunsites and Pearce in Cochise County.