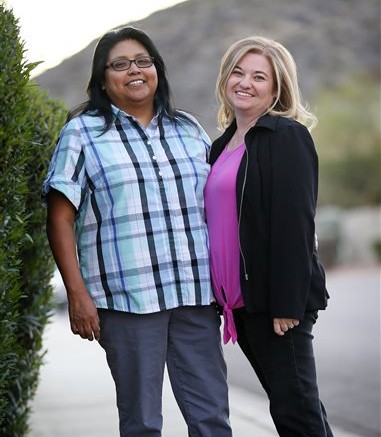 In this Nov. 9, 2015, photo, Cleo Pablo, left, and her wife, Tara Roy-Pablo, stand outside their home in Phoenix. Pablo married her longtime partner when gay weddings became legal in Arizona and looked forward to the day when her wife and their children could move into her home in the small Native American community outside Phoenix where she grew up. The Ak-Chin Indian Community doesnt recognize same-sex marriages and has a law that prohibits unmarried couples from living together. (AP Photo/Matt York)

FLAGSTAFF, Ariz. (AP) — Cleo Pablo married her longtime partner when gay weddings became legal in Arizona and looked forward to the day when her wife and their children could move into her home in the small Native American community outside Phoenix where she grew up.

That day never came. The Ak-Chin Indian Community doesn’t recognize same-sex marriages and has a law that prohibits unmarried couples from living together. So Pablo voluntarily gave up her tribal home and now is suing the tribe in tribal court to have her marriage validated.

“I want equal opportunity,” Pablo said. “I want what every married couple has.”

Pablo’s situation reflects an overlooked story line following the U.S. Supreme Court’s historic decision this year that legalized gay marriages nationwide: American Indian reservations are not bound by the decision and many continue to forbid gay marriages and deny insurance and other benefits.

The reasons vary and to some extent depend on cultural recognition of gender identification and roles, and the influence of outside religions, legal experts say. Other issues like high unemployment, alcoholism and suicides on reservations also could be higher on the priority list, said Ann Tweedy, an associate professor at the Hamline University School of Law in St. Paul, Minnesota, who has studied tribes’ marriage laws.

Advocacy groups largely have stayed away from pushing tribes for change, recognizing that tribes have the inherent right to regulate domestic relations within their boundaries.

“Tribal sovereignty is very important to tribes,” Tweedy said. “They don’t want to just adopt what the U.S. does.”

Pablo follows in the footsteps of a handful of other tribal members in Oregon, Washington state and Michigan who lobbied their governments for marriage equality.

The Navajo Nation is one of a few of the country’s 567 federally recognized tribes that have outright bans on gay marriage. Some tribes expressly allow it, while others tie marriage laws to those of states or have gender-neutral laws that typically create confusion for gay couples on whether they can marry.

The mish-mash occurs because tribes are sovereign lands where the U.S. Constitution does not apply.

But Pablo argues in her lawsuit that members of the Tribal Council are violating the Ak-Chin constitution by denying her equal protection and due process — rights also guaranteed under the federal Indian Civil Rights Act. Her lawyer, Sonia Martinez, said tribal members could have a persuasive argument against gay-marriage bans if their tribe incorporated federal constitutional rights into tribal laws, which she says is the case on the Ak-Chin reservation.

The Ak-Chin Indian Community wouldn’t comment directly on Pablo’s lawsuit but said marriage laws are a matter for the tribe to decide, not the U.S. Supreme Court.

“Whether our current law stays the same or needs to change, it must still be addressed in a manner that best promotes and protects the community’s sovereignty and right of self-governance, and best reflects the culture, tradition, and morals of the community and all of its members within the confines of our laws,” read a statement provided to The Associated Press.

Change for some tribes came easily.

The Central Council Tlingit & Haida Indian Tribes of Alaska enacted a marriage statute in March to expand court services. Chief Justice Debra O’Gara said leaders talked more about whether to allow members of the same clan to marry than members of the same sex.

“There was very little controversy over the same gender aspect because everybody believed it should be open,” she said. “Whoever our citizens are should have the same rights as everyone else.”

Navajo Nation lawmaker Otto Tso said he would expect a heated debate on the tribe’s marriage laws that likely will be brought forth by tribal members. One of them, Alray Nelson, has been outspoken about the Navajo Nation’s ban on gay marriage, but he knows he doesn’t have support from enough lawmakers to get it overturned.

“They’re going to get our attention, and I’m all about listening, hearing them out, hear the concerns,” Tso said.

Fred Urbina, general counsel for the Pascua Yaqui Tribe in southern Arizona, said he suspects the tribe’s laws that are silent on gay marriage will be questioned in the context of benefits and insurance for employee spouses.

Pablo and her son moved in with Tara Roy-Pablo and her children in Phoenix after she discovered the tribe wouldn’t provide insurance to her entire family and she risked arrest if they stayed in her tribal home.

Cleo Pablo said she’s never felt unwelcome in the tribal community where she works as a probation officer but doesn’t believe she should be treated differently under the law.

“As Native people in the community, we’re taught to stand in the background, not create waves,” she said. “I’ve done the opposite. People know who I am, who I was. I wouldn’t rock the boat. It gets to the point if you don’t say anything, nothing is going to change.”