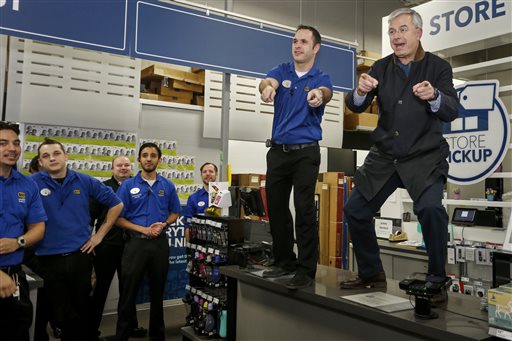 In Colorado, for instance, marijuana stores got into the act. In Arizona, families skipped the spending frenzy to go hiking. And in Chicago, shoppers snapped photos of demonstrators protesting the police shooting of a black teenager.

Overall, there seemed to be smaller crowds throughout stores and malls across the country.

Here’s how the day played out:

Hundreds of protesters blocked entrances to stores in Chicago’s high-end shopping district to draw attention to the police shooting of a black teenager.

The demonstration came after the release of a video this week showing the fatal shooting of 17-year-old Laquan McDonald last year. The video touched off largely peaceful protests.

On Friday, some of the demonstrators in Chicago linked arms to form human chains in front of main entrances to stores.

Store employees directed shoppers to exit from side doors. When one person tried to get through the front door of Saks Fifth Avenue, protesters screamed at him, shouting, “Shut it down! Shut it down.”

Many shoppers seemed to take the disturbance in stride, and some even snapped photos of the crowd.

Protesters took different approaches. The Rev. Jesse Jackson, for instance, led a prayer with a group from the steps of Chicago’s historic Water Tower.

Business was brisk but not overwhelming at a Macy’s in Kansas City as rain that started Thursday morning continued falling. There didn’t appear to be any lines more than a few customers deep.

Gerri Spencer and her daughter left home at 4 a.m. and made their way to a Macy’s store several hours later. Spencer said the crowds seemed sparser than in the past when Black Friday meant “getting out at the crack of dawn” to get the best deals.

Some Black Friday shoppers seemed to miss the holiday crowds.

At a Kmart in Denver, Susan Montoya had nearly the entire store to herself. She half-heartedly flipped through a rack of girls’ holiday party dresses and looked down the store’s empty aisles.

“There’s no one out here! No challenge!” she said.

Lynette Norcup also is nostalgic for Black Fridays of the past.

Sitting in the warmth of her daughter’s SUV waiting for Wal-Mart to open, the resident of Pleasanton, California said she thinks the excitement has fizzled with stores opening on Thanksgiving.

Norcup misses the challenge of strategizing to score deals.

At Denver Kush Club in Denver, about two dozen customers were lined up in subfreezing temperatures and snow showers to take advantage of the deals.

The first few customers got free joints, free rolling papers and a T-shirt with purchase. Medical customers were offered ounces of marijuana for $99 — a savings of about 50 percent.

“We get a lot of people in the first few hours, just like any store on Black Friday,” said co-owner Joaquin Ortega. He said marijuana gift-giving is becoming more common, though most were shopping for themselves Friday.

At Catalina State Park just north in Arizona, dozens of families and dogs hiked through the saguaro cactus-covered mountains. Many said they didn’t plan on shopping on Black Friday anyway.

Krista Wells, of Tucson, said she wanted her daughters to understand that the holidays are about spending time with family, not shopping.

“This is about the season of bringing together and reflecting upon family and getting into the Christmas holiday. I don’t think there’s a retail holiday,” she said.

Jennifer Rojas was hiking down a steep hill with her mother. She said she tries to hike every year after Thanksgiving and likes to avoid the shopping crowds.

“I’d rather appreciate nature, rather than being at a mall or watching TV,” Rojas said.

For the first time, analysts had predicted more than half of online traffic to retailer sites would come from smartphones than desktops during the four-day Black Friday holiday shopping weekend.

On Friday, there was evidence that shoppers were vacillating between both stores and online.

Wal-Mart Stores Inc.’s chief merchandising officer Steve Bratspies told the Associated Press that the chain saw more shoppers buying both on its website and in its stores than the same time a year ago. Target’s CEO Brian Cornell said that online sales on Thanksgiving were strong, outpacing the performance on the holiday a year ago. That’s making it Target’s biggest day online for sales yet, driven largely by electronics. He also was pleased with store traffic.

And J.C. Penney’s CEO Marvin Ellison said that the chain worked hard to make its app more user friendly, and as a result, its online sales.

“We saw customers going back and forth, researching online and then go to the stores,” he said.

Meanwhile, Chip Gentry in Atlanta headed out to stores instead of purchasing items online. He walked out of a Best Buy with an Xbox One and extra controller, saving about $150 in total.

“I’m looking for the deals online and going out to stores to get them,” he said.