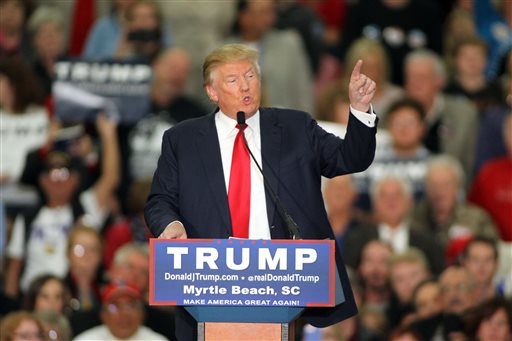 WASHINGTON (AP) — Donald Trump said he couldn’t have been making fun of a reporter’s disability because he doesn’t know the man. Not so, says the reporter.

Serge Kovaleski of The New York Times says he has met Trump repeatedly, interviewing him in his office and talking to him at news conferences, when he worked for the New York Daily News in the late 1980s. “Donald and I were on a first-name basis for years,” he said in a Times story about the Republican presidential candidate’s behavior at a rally in South Carolina last week.

Onstage Tuesday, a mocking Trump flailed his arms in an apparent attempt to imitate mannerisms of the “poor guy.” He accused Kovaleski of backing off a story from a week after the 9/11 attacks that said authorities in New Jersey detained and questioned “a number of people who were allegedly seen celebrating the attacks.” Kovaleski then worked for The Washington Post.

Trump cites the story as proof of his claim that “thousands” of Muslims in New Jersey celebrated the devastation across the river. But the story did not suggest “thousands” were observed celebrating or that the reports of such a scene were true. Other accounts from that time concluded the allegations were unfounded.

Kovaleski has arthrogryposis, a congenital condition that restricts joint movement. In his speech, Trump cited the 2001 story, “written by a nice reporter,” and went on: “Now the poor guy, you oughta see this guy — uh, I don’t know what I said, uh, I don’t remember. He’s going like, I don’t remember.” He made jerking gestures and his voice took on a mocking tone.

On Thursday, Trump posted a statement on his Twitter account saying “I have no idea” who Kovaleski is and claiming to have “one of the all-time great memories.”

He wrote: “If Mr. Kovaleski is handicapped, I would not know, because I do not know what he looks like. If I did know, I would definitely not say anything about his appearance.”

“I’ve interviewed him in his office,” he said. “I’ve talked to him at press conferences. All in all, I would say around a dozen times, I’ve interacted with him as a reporter” when he worked for the Daily News.