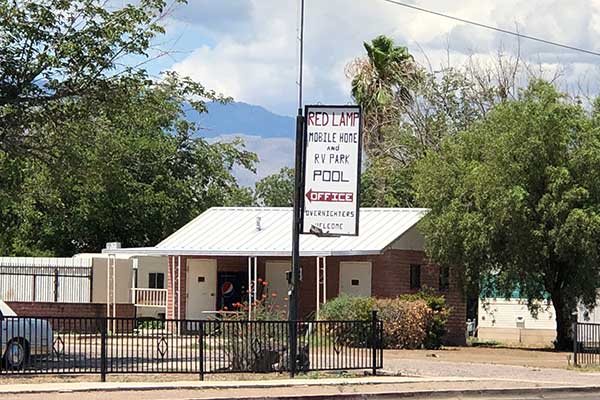 THATCHER – The Town of Thatcher has purchased the Red Lamp Mobile Home Park. Acting Town Manager, Heath Brown, told Gila Valley Central that the park was getting fairly run down and the owner had it on the market. Town officials met with the owner, negotiated a price and purchased the property.

The town plans to vacate the park, clean up the site and turn it back to raw land. They’ll leave the trees in case they work into future development.  Most of the renters have already moved out. There are five or six families living in the park that own their mobile homes. They have until November to move.

There are no specific plans for the property yet. “We’ve talked about lots of idea,” Brown said. “We’ve talked about maybe the south portion being single family homes, where it would be up against the other houses and the highway portion being commercial. We may put a small green space – a kind of walk-able area – that could be developed around. We are open to proposals from private developers. At some point we may even request proposals.”

Town officials are getting ready to redo the town general plan, and as part of that they’ll have a consultant look at the site and come up with some conceptual ideas of what may be done with it.

The town will start removing some of the homes that were owned by the park. Many of them haven’t been occupied for years and are completely dilapidated. The town may look into having a scrapper dismantle the older homes.

Brown says the town will try to save as many of the homes as possible, although they will have to be moved off the property. There may be a few that are salvageable. They might be auctioned off or sold, but there are potential problems with mobile homes that were built before 1976. Some of them may have lead paint and asbestos as well as wiring problems and other issues. It may cost more to fix them up and move them than they’re worth.

“The goal is to improve Thatcher,” says Brown. “We want to improve the area, make it look good, generate a profit for the town, and encourage more beautification along the highway. We hope that in the end it’s a positive for the Town of Thatcher.”