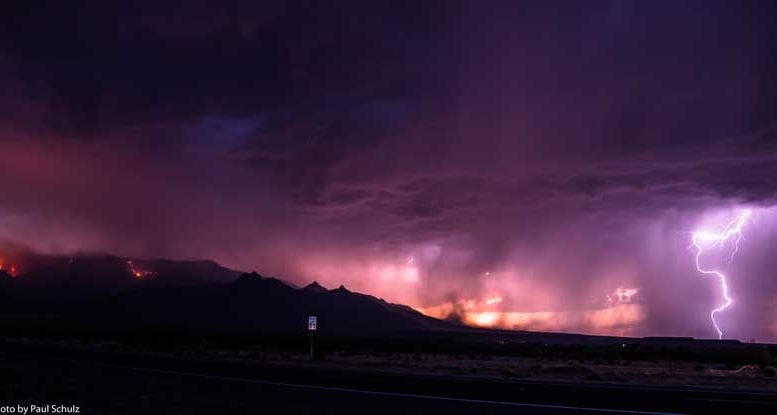 Contributed Photo/Courtesy Paul Schulz: Graham County officials are warning the public about the dangers of flooding during the monsoon after the Frye Fire.

Fire now 38,395 acres and is less than two miles from Turkey Flat

MOUNT GRAHAM – A thunderstorm blew over the Frye Fire on Mount Graham on Sunday night but offered only marginal help to fire suppression efforts.

The Northern Rockies National Type 1 Incident Management Team led by incident commander Greg Poncin transitioned to managing the fire at 6 p.m. Sunday and were gifted with the thunderstorm less than two hours into its turn at the top. Unfortunately, the rain was sporadic at best in the area. 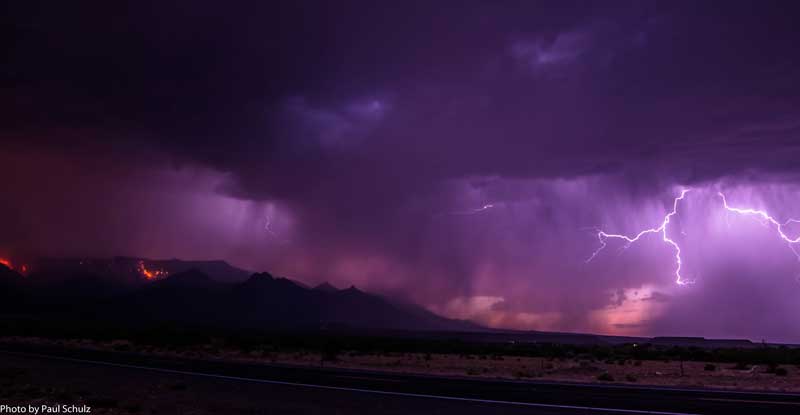 Contributed Photo/Courtesy Paul Schulz: The thunderstorm makes its way over Mount Graham in this view from Highway 366.

“It may have made it slightly easier for the firefighters last night and stuff like this slows things down during the day, but there’s another dry trend coming up, so it’s going to have a short lifespan as far as helping on this fire,” Frye Fire public information officer Mike Cole said.

The fire was listed at 38,395 acres with 39 percent containment as of Monday morning, and it was reportedly roughly two miles from the cabins at Turkey Flat. The fire was started by lightning, June 7 at 2:45 p.m.

The storm came in from the west at about 7:35 p.m. and brought quite the lightning show and accompanying thunder associated with a monsoon-type storm.

Jon Johnson Photo/Gila Valley Central: There were multiple direct lightning strikes to Mount Graham, but no new fire starts have yet to be reported.

Previously, the monsoon in Arizona was acknowledged to have started after the state had three consecutive days where the dew point averaged 55 degrees or higher. In 2008, however, the National Weather Service established the first day of the Arizona monsoon season as June 15 and the last day as Sept. 30, regardless of the dew point average. The average start date for the monsoon using the dew point method is July 7, and that meteorological definition is yet to be reached.

That being said, it wasn’t surprising that the storm, while looking and sounding impressive, didn’t drop a significant amount of rain like the usual monsoon storm. The University of Arizona Meteorological Network Agriculture Station near Solomon only recorded .17 of an inch of rain for the storm, with some residential rain gauges in Thatcher recording roughly half an inch. However, only .04 of an inch was recorded at Noon Creek, near one of the most active areas of the fire.

Several lightning strikes hit directly in the Frye Fire area but no new fire starts had been reported as of Monday morning. The Forest Service will perform reconnaissance missions to look for new starts.

The bulk of the fire suppression effort continues to be centered around protecting the 74 cabins at Turkey Flat. According to Cole, the fire was making its way through Grapevine Canyon and was less than two miles away from the cabins as of Monday morning.

Crews worked tirelessly Saturday, removing small trees and other fuel while continuing to clean out the areas around the cabins. More than three miles of water lines have also been laid and approximately 40,000 gallons of water, which includes self-managing pump stations with 1,800-gallon tanks with 5-gallon fuel systems to run without anyone maintaining them if firefighters are not able to be inserted due to dangerous conditions. The area has been wetted down by the sprinkler systems for several days.

Some of the same protections have also been placed at the historic Angle Orchard, including clearing brush and preparing sprinkler lines. So far, the orchard has been spared from any damage.

The Mount Graham International Observatory, Bible Camp, Columbine and cabins at Old Columbine were downgraded to no longer being threatened by the fire last week.

On Saturday, the Forest Service released pictures of the area around Old Columbine, showing that no structures had been lost and trees were still standing. 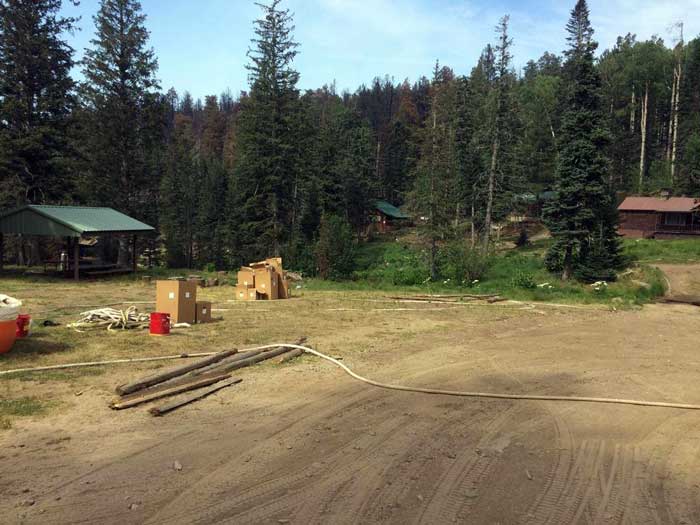 Contributed Photo/Courtesy Forest Service: This picture taken Sunday by structure protection specialist Scott Waldron shows the structures in Old Columbine were undamaged as the fire swept through the area.

While the fire progressed over the areas, coming within 50 feet of the Vatican Advanced Technology Telescope possibly causing heat damage, none of the structures actually caught fire thanks to the defensive efforts of the firefighters and a tanker slurry that saved the MGIO.

Firefighters continue to monitor the western progression of the fire and wait to engage until it reaches a lower elevation where the terrain and different fuels allow for improved firefighter safety and a better chance at successfully dousing the flames.

As the thunderstorm moved over the area, the fire went dark but reemerged after the storm had passed through. Helicopters supported firefighters in the Snow Flat area to help minimize the fire’s growth.

Crews continue to fight the fire near Riggs Lake as well, trying to keep the campsites and various structures safe.

Contingency lines are also being prepped to stop the fire’s progression and keep it to Forest Service lands.

The Bar X Fire, which was started by lightning June 21 and burned roughly 2,755 acres of mostly grass about five miles south of Ladybug Peak, was listed as being 100 percent contained.

There were 100 firefighters that shifted over to handle the Bar X Fire, including a Hot Shot crew from Payson. The owners of the McClure’s Lazy S Ranch thanked the Payson Hot Shot crew for saving their historic home.

For those wondering about the Kimball Tree, related to former Church of Jesus Christ of Latter-day Saints leader Spencer W. Kimball who was from the Safford/Thatcher area, and the Arrow Tree frequented by hunters, Cole has reported that both trees are alive and well.

To date, the Frye Fire has caused no injuries, burned no structures and has cost an estimated $9.8 million.