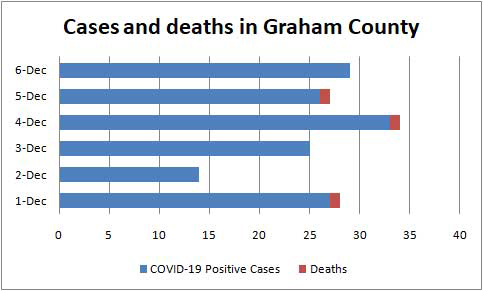 SAFFORD — Graham County experienced another COVID-19 related death over the weekend, a Thatcher resident over the age of 65.

It was the third coronavirus-related death so far this month and the fourth over an eight-day stretch starting Nov. 28. In each instance, the victim was over the age of 65.

That’s the second lowest total for any age group, just behind the 14 cases (8 percent) involving those 55 to 65 years old.

The number of new cases continues to outpace that of the county’s peak month of November, when there were 162 cases through the first seven days of the month.

There have been 35 new cases in Greenlee County thus far in December.

Greenlee County’s total is at 297, with a positivity rate of 16.7 percent.