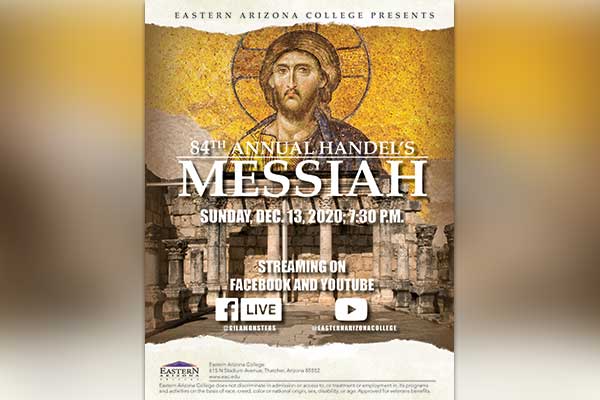 Special pre-recorded program with current and past performances streams Dec. 13

Messiah is one of the best known, most beloved, and most frequently performed choral works in all of Western music. Composed by George Frideric Handel in 1742 in just 24 days, Messiah includes a scriptural text compiled by Charles Jennens that recounts the story of Jesus Christ’s life in three sections – from His birth to His death and eventual Resurrection.

Eastern Arizona College has a long history performing Handel’s Messiah. On Sunday, Dec. 18, 1936, eighty-two singers staged a performance of the celebrated oratorio with community singers, including Spencer W. Kimball, who later became the twelfth president of The Church of Jesus Christ of Latter-day Saints. This initial performance set in motion the longest running tradition of annual Messiah performances west of the Mississippi.

“Handel’s Messiah has uplifted people since the day of its debut,” said EAC choir’s director Gideon Burrows. “It continues to move people of all ages through its inspiring lyrics and our community’s talented performers. While today’s unprecedented global challenge keeps us apart, this virtual performance continues the tradition and brings us together to sing during a time when we need it most.”