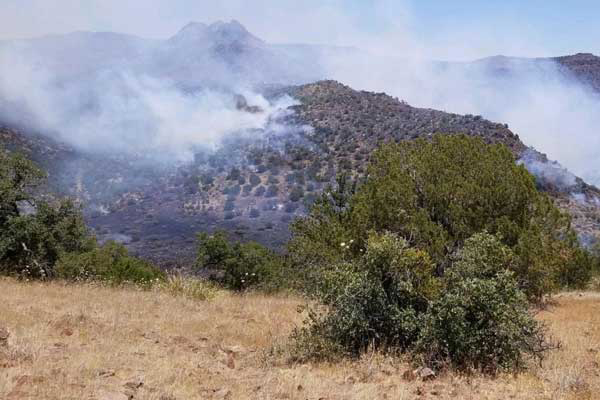 Contributed Photo. The Blue River fire, near san Carlos started from a lightning strike June 5 and has burned 30,400 acres thus far. It is at 50-percent containment as of June 12.

CLIFTON — Lightning is the cause of three wildfires burning in the area.

The Bringham fire in the Clifton Ranger District of the Apache-Sitgreaves National Forest, about 22 miles north of Morenci, started June 6. It has burned 4,800 acres thus far and is considered a threat to U.S. Highway 191/the Coronado Trail.

A total of 166 personnel are on scene to battle the blaze, which incident command hopes to have contained by June 20.

The Dry Lake fire, about 22 miles northeast of Bylas, started June 6 and has consumed 4,365 acres thus far. About 100 personnel are on scene and have about 15 percent containment.

The Blue River fire, about eight miles northeast of San Carlos, has burned the most land since ignition June 5 — 30,400 acres.

It’s at 50 percent containment and there are 140 personnel on scene fighting the fire.