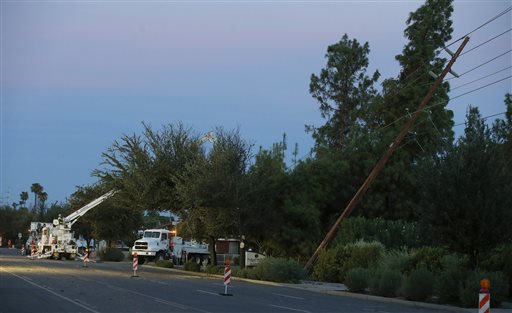 PHOENIX (AP) — Tens of thousands of Phoenix-area residents and businesses, including a food bank, were without power more than 12 hours after a monsoon storm knocked down trees, damaged buildings and toppled a tractor-trailer on a freeway.

The area’s two major utilities reported that 50,000 customers still had no electricity Tuesday morning — down from 70,000 immediately after Monday evening’s storm.

The severe weather began moving through the area around sundown and swept across central Phoenix, Scottsdale and Tempe with lightning, winds of up to 65 mph and up to 1.3 inches of rain, according to the National Weather Service.

Flooding temporarily closed some roads and freeway ramps, while high winds knocked over a tractor-trailer on Interstate 10, sending it crashing onto the hood of a car. Dozens of traffic signals remained dark during Tuesday morning’s rush hour.

Fire officials said they received more than 400 calls for water rescues and other problems in a two-hour period. That’s the number they normally receive in an entire day. But there were no reports of deaths or serious injury.

Salt River Project said it expected to restore power to most of its affected customers by Tuesday afternoon. Arizona Public Service Co. said it would be gradually restoring power to many customers through Tuesday but small pockets of customers may take longer.

Several schools were closed Tuesday because they had no electricity.

The main warehouse of St. Mary’s Food Bank Alliance lost power, and the nonprofit used borrowed refrigerated trucks to move Thanksgiving turkeys and other perishables to a smaller warehouse and to recipient agencies.

“We’re going to lose stuff because it’s too hot, but we’re going to save as much as we can,” said spokesman Jerry Brown. “This is a race against time.”

Phoenix Sky Harbor International Airport suspended takeoffs and landings for more than an hour and temporarily halted part of a shuttle train’s operation Monday night. One gate at Terminal 3 was closed for cleanup and repairs after the top layer of part of a concourse’s roof was blown off, resulting in water damage, airport spokeswoman Julie Rodriguez said.

The Federal Aviation Administration’s website showed there were no significant delays Tuesday morning.

Strong rain and wind storms are common in Arizona during the state’s monsoon, a regular season that usually runs from June 15 to Sept. 30. They typically strike in the late afternoon or early evening and often are accompanied by giant walls of blowing dust.