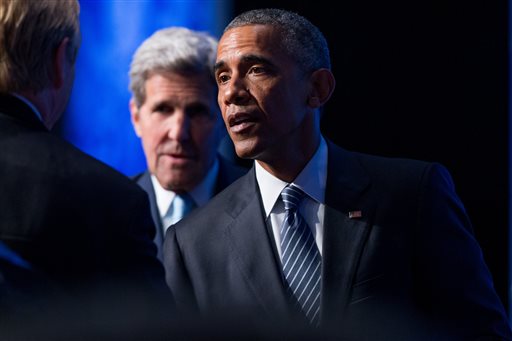 President Barack Obama, accompanied by Secretary of State John Kerry, left, greets dignitaries after speaking at the Global Leadership in the Arctic: Cooperation, Innovation, Engagement and Resilience (GLACIER) Conference in Anchorage, Alaska, Monday, Aug. 31, 2015. Obama opened a three-day trip to Alaska aimed at showing solidarity with a state often overlooked by Washington, while using its changing landscape as an urgent call to action on climate change. (AP Photo/Andrew Harnik)

ANCHORAGE, Alaska (AP) — President Barack Obama is painting a doomsday scenario for the Arctic and beyond if climate change isn’t dealt with fast: entire nations submerged underwater, cities abandoned and refugees fleeing in droves as conflict breaks out across the globe.

It’s a harrowing image of a future that Obama insists is inevitable unless the world follows his and America’s lead by making sweeping cuts to greenhouse gases. The president was to drive the message home on Tuesday by hiking a melting glacier in Alaska.

Obama is counting on Alaska’s exquisite but deteriorating landscape to elicit a sense of urgency that his previous calls to action on climate change have not. He opened his three-day trip to the nation’s largest state on Monday with a speech to an Arctic climate summit, calling global warming an escalating crisis already disturbing Alaskans’ way of life.

“We will condemn our children to a planet beyond their capacity to repair,” Obama said. Alluding ironically to the threat of rising seas, he castigated leaders who deny climate change as “increasingly alone — on their own shrinking island.”

The trip is more about visuals than words, and the high point comes Tuesday when Obama flies by helicopter to Seward to hike the famed Exit Glacier, a sprawling expanse of ice that is liquefying under warmer temperatures.

Some 700 square miles in the Kenai Mountains are blanketed by glacier ice, remnants of the Ice Age, when roughly a third of the Earth was covered with sheets of ice. One of nearly 40 glaciers springing out from Harding Icefield, Exit Glacier has been receding for decades at a rate of 43 feet a year, according to the National Park Service.

Obama will make the first visit by a sitting president to the Alaska Arctic amid concerns that the U.S. has ceded influence to Russia in the strategic waters. The U.S. currently has two working icebreakers, compared to Russia’s 40. The White House said Tuesday it would ask Congress to speed up construction of new icebreakers.

On his first day in Alaska, Obama offered no new policy prescriptions or federal efforts to slow global warming, but said the U.S. would do its part by cutting emissions of heat-trapping gases by up to 28 percent over the next decade. Obama set that target as the U.S. commitment to a global climate treaty to be finalized in December, and has urged fellow leaders to make similarly ambitious pledges.

Despite his steps to reduce emissions, the U.S. isn’t quite the shining example that Obama portrayed. Each American emits more than twice as much carbon dioxide as a Chinese resident and ten times that of someone from India, Energy Department figures show. China, the U.S. and India are the top three polluters.

The U.S. has cut its carbon dioxide emissions from fossil fuels by about 8 percent since 2000, and around 7 percent since Obama took office. But some industrialized, European nations have made even steeper cuts, including Britain, Spain and Denmark.

By turning to Alaska’s majestic mountains and stirring coastlines to make his point on climate, Obama also brought fresh attention to deep divisions in the U.S. over how to balance the nation’s energy and environmental needs.

Heavily dependent on energy revenues, Alaska is suffering economically due to a plunge in oil prices, a blow compounded by the high cost of energy in the state. Alaska leaders of all political stripes have implored Obama to open up more areas to drilling to alleviate a $3.5 billion budget deficit that has triggered steep cuts to state services that are critical for poor and rural Alaskans.

“For a population as small as we are, it’s pretty significant,” Alaska Gov. Bill Walker told reporters as he flew with Obama to Anchorage.

Obama has elevated global warming as a rallying point in his second term. But he has a complicated record on energy that has muddied his message.

The president has struggled to explain how his dire warnings square with steps he’s taken to expand energy production, even at the risk of higher emissions. Environmental groups are criticizing the administration’s move to allow expanded drilling by Royal Dutch Shell off Alaska’s northwest coast just a few weeks ago.

Obama has defended those decisions by arguing that some fossil fuel development is a necessity as the U.S. undergoes a longer-term shift to clean, renewable fuels that don’t cause the planet to get warmer. But environmental groups say the Shell decision is a stain on his climate legacy.