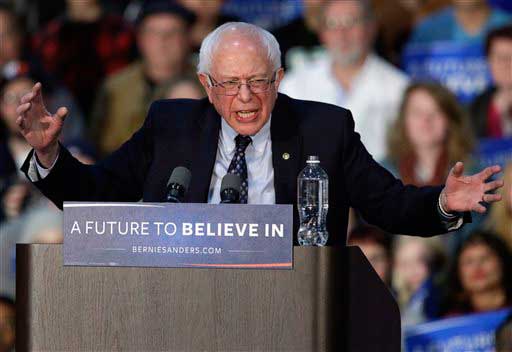 DES MOINES, Iowa (AP) — Bernie Sanders has a catchphrase. But is it already taken?

At recent events for the Democratic presidential candidate, supporters have latched on to his pronunciation of the word “huge,” which in his distinctive Brooklyn twang sounds more like “yuge.” But that word — and the delivery — is already associated with Republican front-runner, and fellow New Yorker, Donald Trump.

Perish the thought that Sanders, a scold of billionaires, is mimicking one. Huge, without the first letter, “must have been one of the first words he ever learned to say,” said his spokesman, Michael Briggs.

Sanders may have a lifelong association with the word, but fans appear to have picked up on it after a recent appearance on “Saturday Night Live.”

The Vermont senator appeared with Larry David in a sketch where both portrayed characters trying to survive a shipwreck similar to the Titanic. David likens Sanders’ ideas to socialism, to which Sanders says: “democratic socialism,” adding “huge difference” in his signature style.

Now at his packed rallies, Sanders’ backers bellow the word with glee as he offers his campaign pledges to break up big financial institutions and overhaul the campaign finance system. In Michigan recently, Sanders bantered with the crowd.

“People want you to think small. Think small,” Sanders said, as cries of “huge” rose from the crowd. “I think it’s time to think big.”

As the crowd kept calling out “huge,” Sanders acquiesced: “All right, you can think huge!”

Conrad Foreman, 21, a student at the University of Michigan, brought a sign to the rally that read: “The revolution, it’s going to be YUUUUUUGE.”

“It’s just catching on to the authenticity of him,” Foreman said.

Much earlier in the presidential campaign, that word had already been practically trademarked by Trump. His pronunciation of “huge” has been imitated by late night hosts and slapped on T-shirts. Trump doesn’t use it much in rallies these days, though his staff still uses “yuge” as a Twitter hashtag.

Scott Koenig, 41, a builder in Charleston, South Carolina, said he was certain “huge” was Trump’s phrase.

“You say it all the time when you talk about Trump,” said Koenig, who went to a Trump event out of curiosity. “It’s a northeast thing. I can see that, but I think it’s funny.”