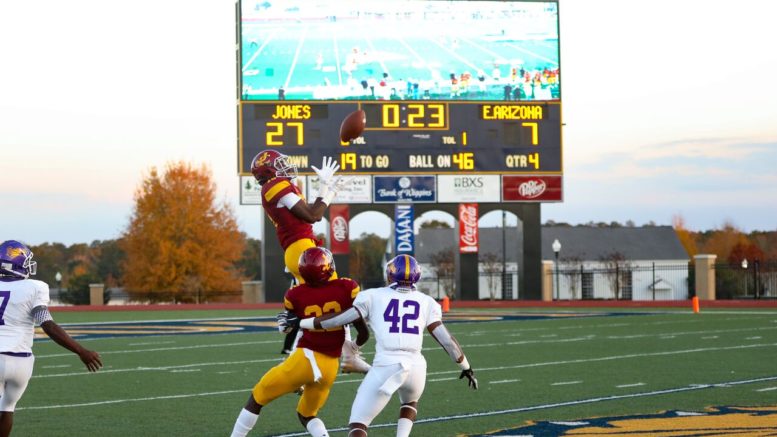 Jones College intercepts EAC on what is now the final play of EAC football.

This OpEd is provided to GilaValleyCentral.net by Brian Wright, Sports Editor at the Casa Grande Dispatch. He covered EAC football from 2006 to 2010.

Eastern Arizona College pulled the plug on its football program Tuesday, effectively killing all junior college football in Arizona. With that comes a sense of melancholy and a good bit of outrage from players, coaches and supporters.

It all started in February, when the Maricopa County Community College District Governing Board, citing financial losses, voted to eliminate football at every school in the district that had a program – Phoenix, Scottsdale, Glendale and Mesa.

Whether those financial numbers are accurate is still a topic of debate.

EAC was the last school standing, and it held a meeting last Thursday to solicit public input on the viability of keeping football. The school’s director of fiscal control, Wayne Layton, told attendees the football program was costing Eastern $500,000 a year, according to gilavalleycentral.net.

The expectation was EAC would take its time mulling over its options. Instead, it dropped the guillotine blade Tuesday, severing the head of a football program that began in 1920.

Since I began covering Pinal County sports in the fall of 2011, I never had the opportunity to cover JUCO football because Central Arizona College didn’t have a team.

But I had the privilege of covering EAC football for five seasons from 2006 to 2010.

Thatcher, a town of about 5,000 people, was a special place for football. The entire community, and the neighboring towns of Safford and Pima, would fill the stands every Saturday night. It was the place to be, literally the only game in town.

Because of that experience, I know JUCO football well. I understand what it means to the state. I know of the opportunities that will be lost for athletes. This is a terrible decision in every way.

And those opportunities are about more than just football. Going the JUCO route allows many football players – who would otherwise never have the chance – to attend a four-year university and earn a degree.

These shortsighted administrators don’t get it. They grandstand on the notion of fighting for academics, when in reality they are eliminating the best academic opportunity many of these football players will ever have.

When I spoke to three former Casa Grande Union football players who played at Mesa Community College this season, they spoke in unison about how damaging it would be if JUCO football programs were eliminated.

“It’s hurting a lot of kids, to say the least … without this, a lot of careers are going to be ended,” said Cooper Gragg, Mesa’s starting center. “There’s going to be no chance for kids like us to be successful and have that second chance.”

EAC coach John O’Mera, who coached the team when I covered the Gila Monsters – and remained the coach until Tuesday’s surprise axing of the program – used to tell me about those opportunities.

Thatcher, he said, was even more attractive to many athletes who needed to work on their grades or stay out of trouble. Why? There wasn’t a damn thing to do in that town, so it provided a place that allowed them to focus on the task at hand.

OK, so there were still a couple of places where one could get into trouble in Thatcher. But it provided far fewer distractions and chances for mischief than a place like Phoenix or Scottsdale.

In December 2007, I traveled with the team to Chihuahua, Mexico, for Eastern’s first-ever bowl game, the Aztec Bowl. I was there three days, was put up in the team hotel, and even visited the governor’s mansion for a dinner party.

It was the most fun, memorable experience I’ve had covering sports. The coaches and the players were proud to represent the United States against an all-star team from Mexico.

I was on the sideline for that game (which EAC won 35-9) with Todd Haynie, who was then a spokesperson for the college. He was having the time of his life shooting photos, wearing a purple smock that read “Prensa” (Spanish for press) on the back, flapping in the wind on a chilly evening.

Everyone associated with the school, including staff and the school president, beamed with pride during the trip and basked in the glory of victory after the game.

Haynie, now the school president, was tight-lipped throughout the recent process about the football program’s future.

In a statement about the decision to eliminate football, he cited “drastic changes” that took place in the Western States Football League that were “outside our control.” He then referenced the football open house last week where public input, as well as input from campus and community leaders, was gathered.

“This review concluded that the amount of spending was not proportional to the program’s contribution to EAC’s institutional mission,” he said.

O’Mera went out the right way, delivering a WSFL championship in the program’s final season.

EAC could have kept its football program and been the singular shining light in the state, like Snow College is in Utah.

Instead, it turned out the lights in Thatcher, signaling the death of JUCO football in Arizona – and the end of opportunities it provided for so many.