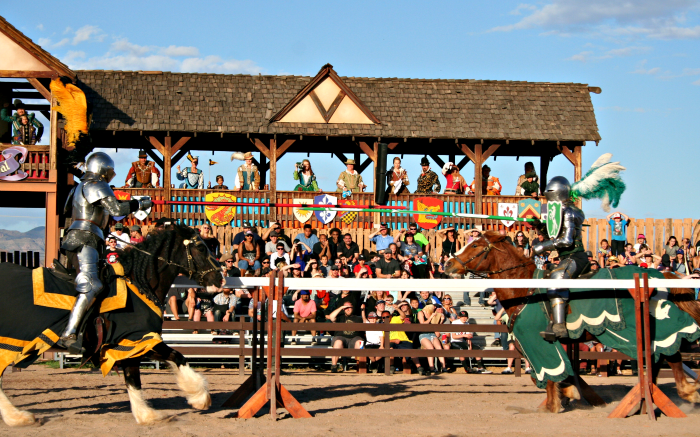 The sun is bright, and the merriment and music of the Arizona Renaissance Fair has come again. Seven miles east of Apache Junction on US Highway 60, the Renaissance Festival is located amid the Arizona cacti, but its stage is set in the European Renaissance era.

Open Saturdays and Sundays from February sixth to March twenty-seventh, the festival is here to entertain. Tickets to the festival are available at any Fry’s store, and right outside the Festival’s entrance.  Once the tickets have been purchased, the day begins with the boom of a cannon at ten o’clock i
n the morning. From ten in the morning until six in the afternoon, the festivities continue until the afternoon cannon goes off with a shuddering explosion.

Music is everywhere. There are jugglers, hypnotists, dancers, and magicians. The festival
is a medieval amusement park with thirteen stages, and a thirty acre circus. There is a feasting hall, and a jousting tournament. Amusement for all ages include man-powered children’s rides and real swimming mermaids.

The smell of fried turkey legs drift on the dusty Arizona breeze,while the sounds of rare instruments and odd music radiates from every direction. To one side, the band Tartanic performs on the bagpipes and drums to a quick beat that would hasten anyone’s heart. On the other side of the grassy lawn, a historical dancing troupe called the Danseries practice the dances of the Renaissance court to the music of a violin and recorder.

Women call out to advertise chocolate while men walk through the street on stilts. Not only is the festival filled with music and food, but it is an artisan marketplace as well. The streets are lined with shops selling everything from complete costumes and books to fairy wings and physic palm-readings. Talent and beauty is everywhere from the music drifting on the breeze to the art hanging in the shops.

Actors in complete Renaissance costume walk amongst the patrons. Kings, Queens, Princesses and Pirates meander about the festival to interact with the festival goers. Friar Tuck walks with a fishing rod, since he is on a quest to capture a mermaid. If a patron is especially watchful, they might spy Robin Hood as he awaits to lure Prince John into an ambush.

Although there are several jousts throughout the day, the final joust to the death has the biggest crowed. Drawn by the unknown, the patrons walk steadily to the Jousting Arena to fill its seats. Soon the scene is set, and the knights clad in shining armor race into the arena on huge charging horses. With brilliantly colored feather plumes on their helms, they ready in the lists as their squires bring their lances. At the signal, two knights charge each other as they hasten their horses to a full run to hit their opponent’s shield. These two chargers run at each other at approximately twenty miles per hour, their combined impact resulting at forty miles an hour. After some calculations, the rough estimate of a perfectly executed strike would be forty thousand pounds of force per square inch. Jousting is an exhilarating sport, and not for the faint of heart.

The aim of the joust is to accumulate points from shattering shields and breaking lances.  However, since this is a joust to the death, there must indeed be death! Whoever wins the joust is ultimately challenged by his fellow competitors. After the challenge has been given to the winner, there is a sword fight on foot to the death. Each knight keeps in his character. Through cunning, skill, and even trickery, the fight for the winning title is brutal but exhilarating. The crowd cheers for their favorite knight and boo his opponents as the scene plays out.  In the end, only one contestant of the four walks away triumphant. After the duel is finished, the knights arise from the dirt and acknowledge their fans as the crowed cheers them on.

Every year there are new acts and new scenarios to play out for the patrons. Even though you may have gone years ago, I would suggest to anyone to go again. There will always be something new and exciting at the Arizona Renaissance Festival.