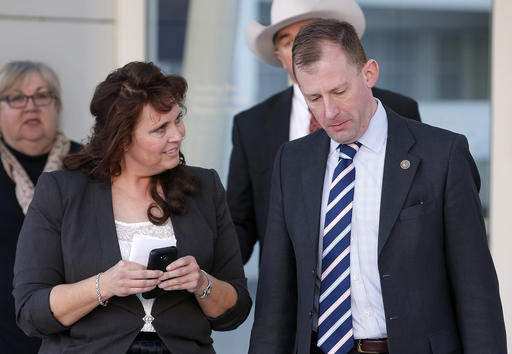 FILE - In this Jan. 27, 2016, file photo, Charlene Jeffs, left, the former sister-in-law of Warren Jeffs, church leader of the Fundamentalist Church of Jesus Christ of Latter Day Saints sect, talks with with U.S. Justice Department attorney Sean Keveney, as they leave the Sandra Day O'Connor U.S. District Court together after her day of testimony during a federal civil rights trial against two polygamous towns on the Arizona-Utah line in Phoenix. Two polygamous towns on the Utah-Arizona border violated the constitutional rights of nonbelievers by denying them basic services such as police protection, building permits and water hookups, a jury said Monday, March 7, 2016. (AP Photo/Ross D. Franklin, File)

PHOENIX (AP) — A jury verdict against two polygamous towns in Arizona and Utah for discriminating against nonbelievers now puts the future of the communities in the hands of a judge who will have to remedy the sweeping civil rights violations.

Federal authorities haven’t specified the changes they’ll seek in Colorado City, Arizona, and Hildale, Utah, but the judge has several options, including disbanding the towns’ shared police force, one of the targets in the Monday’s verdict.

Former church member Richard Holm, who was arrested by local police for trespassing on a property to which he held the title, said the jury’s decision would be hollow if the judge doesn’t disband the Colorado City Marshal’s Office and instead put county sheriffs in charge. “For there ever to be a decent community, there’s gotta be new faces, new control,” Holm said.

The jury concluded the towns violated the constitutional rights of nonbelievers by denying them basic services such as police protection, building permits and water hookups. U.S. District Judge H. Russel Holland is expected to order changes to the communities in the coming months.

The trial marks one of boldest efforts by the government to confront what critics have long said was a corrupt regime in the neighboring communities. It provided a rare glimpse into the communities that for years have been shrouded in secrecy and are distrustful of government and outsiders.

The jury awarded $2.2 million to Holm and five other residents for emotional distress as a result of housing discrimination, but the towns will have to pay only $1.6 million because of a settlement in that part of the case that was reached while the jury was deliberating.

Other possible remedies that Holland could order include barring town officials from discriminating, requiring fair-housing training for town employees and having a court-appointed official monitor whether the town is complying with court’s orders.

The possibility of disbanding the marshal’s office was raised earlier by the state of Arizona in a separate housing discrimination case against Colorado City, though that case’s judge kept the police force intact.

“There is nothing that the government can do or really should be able to do to change someone’s faith,” Matura said.

The towns were accused of doing the bidding of the Fundamentalist Church of Jesus Christ of Latter Day Saints, a radical offshoot of mainstream Mormonism, which disavowed polygamy more than 100 years ago. The trial came as the federal government waged fights on multiple fronts to rein in church activities.

A grand jury in Utah has indicted several church leaders on charges of food stamp fraud.

The U.S. Labor Department has a separate action against a ranch with ties to the church over a pecan harvest in which prosecutors allege that children were forced to work long hours with few breaks.

During the civil rights case, the Justice Department said town employees assisted the group’s leader when he was a fugitive and took orders from church leaders about whom to appoint to government jobs.

Jurors concluded officers treated nonbelievers inequitably when providing police protection, arrested them without having probable cause and made unreasonable searches of their property.

One woman who was denied a water connection testified that she had to haul water to her home and take away sewage for six years. A former sect member said police ignored hundreds of complaints of vandalism on his horse property because he was no longer part of the church.

The towns deny the allegations and say the government is persecuting town officials because it disapproves of their religion.

“If this was any other community in America, this would not be happening at this level,” Hildale attorney Blake Hamilton said after the verdict. “The scrutiny these communities have been under is just unprecedented.”