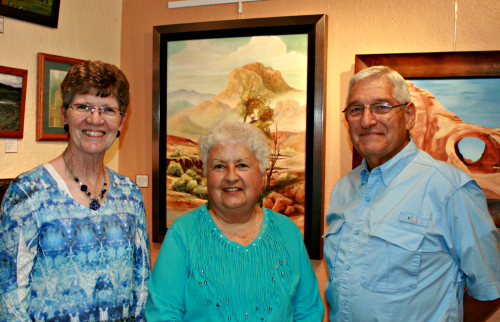 THATCHER – The seasons are changing, and that means it’s time for a change of art.

On Friday, the Little Art Gallery at 3915 W. Main St. in Thatcher had an opening to celebrate its new western-themed exhibit, which will be on display for the next two months. Roughly 15 different local artists contributed the exhibit, creating a vast array of artwork with different styles and techniques circling the western theme.

One of the gallery’s directors, Edith Austin, said the idea for the theme came from one of the art magazines the gallery advertises with.

“We found out that a magazine that we have an advertisement in was going to do that theme for their fall publication, and so we decided to go along with their theme and add it to ours,” Austin said. “So that will be through the month of September and October. It’s centered around the wild west. All of the paintings that we are featuring here will have a western flavor.” 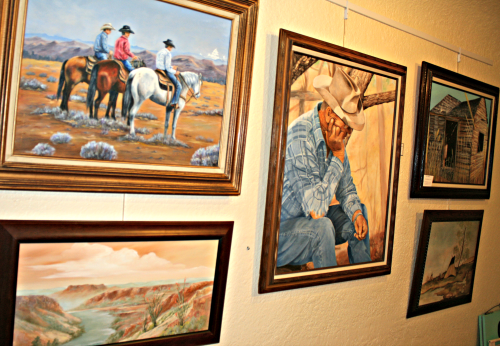 Brooke Curley Photo/Gila Valley Central: The western theme is prevalent in every work on display at the Little Art Gallery’s recent exhibit.

The Little Art Gallery is a nonprofit group and admission to the gallery is free. Even so, the opening didn’t fare as well as hoped and was poorly attended.

Andrea Jenson, a Thatcher resident and art professor at Eastern Arizona College, told Gila Valley Central about her involvement with the Little Art Gallery. Jenson, who was the featured artist for June at the gallery, had nothing but praise for the gallery and guild.

“The Art Guild of Eastern Arizona is full of some of the best and kindest people I’ve ever had the privilege of associating with,” Jenson said. “I think a lot of people don’t realize that the Gallery and Guild are not just for artists. The Gallery is open for the public to come in and see the art for free, and many Guild events are open to the public also.”

Another good element of the gallery is that the displayed artwork is for general audiences. None of the artwork on display features graphic nudity or violence. Jenson stressed this point when she spoke to Gila Valley Central.

“I love that the gallery is family-friendly,” Jenson said. “(There is) nothing you wouldn’t want your kids to see. The Little Art Gallery is a wonderful and unusual place. You can step out of the everyday world for a little while and have a new experience through artists’ eyes.”

If the artwork is too pricey to buy, prints are also for sale. The Little Art Gallery is open Tuesday – Saturday, from 10 a.m. – 4 p.m.