THATCHER – It was a time of celebration of the Christmas spirit and welcoming to the newly elected and re-elected members of the Thatcher Town Council at its meeting Monday night.

There was a new face among the familiar as newly elected Councilor Randy Bryce took the oath of office with returning members, Mayor Bob Rivera, Vice Mayor Aaron Allen and Councilor Wayne Griffith.

Mayor Rivera told Gila Valley Central that the aspect of a new face on the council was always a good thing.

“Anytime we have new members that means new ideas and new diversities,” Rivera said.  “We have people (who) come up with different projects and plans. We’re very excited that he’s going to jump on board and move forward with the rest of the council.”

Bryce told Gila Valley Central that he was excited about his new responsibilities.

“I think the previous councilmen did a great job,” Bryce said. “I have no qualms with their abilities and with and the things they were working on. They did a good job. I look forward to serving the town and getting my sleeves rolled up and my hands dirty and trying to do what needs to be done.”

Aside from the swearing in of the councilors and mayor, the Thatcher Town Council also awarded prizes for its best Thatcher house Christmas decoration contest. The grand prize of $150 went to David Ramirez, followed by the first prize of $100 to Daniel McDowell, second prize of $75 to Chad Rolfe and the third prize of $50 to Raul Alaniz. 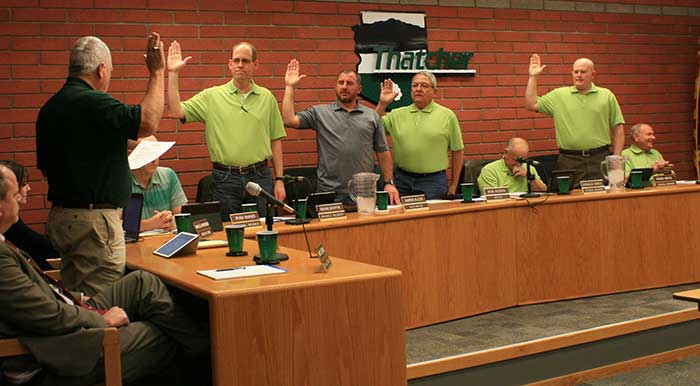