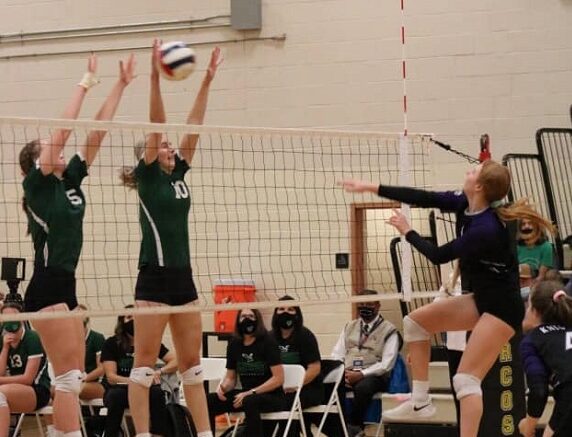 Thatcher's Liv Lunt blocks at the net in a win at the state tournament. Photo by Macey McRae

PHOENIX — It was a great weekend of volleyball at the state tournament for Thatcher and Pima. Both teams were able to get through two rounds with relative ease to move into next weekend’s semi-finals.

They will take on #2 Scottsdale Christian at noon on November 21st at McClintock High. SCA beat Phoenix Christian and Phoenix Country Day in straight sets to advanced to Saturday’s semi-finals. Pima and SCA played October 12th with the Eagles winning 3-0. It was also the last time Pima lost before starting their current 11 match winning streak.

The winner will meet the winner of Trivium Prep and Chandler Prep in the 2A Championship.

Thatcher’s move up to 3A hasn’t slowed down their volleyball program. The #4 seeded Eagles will face #1 Northwest Christian on Saturday at 11am at Marcos de Niza High School in Tempe.

It will be the first meeting between Thatcher and Northwest Christian this season.

Snowflake and Valley Christian will meet in the other 3A semi-final.