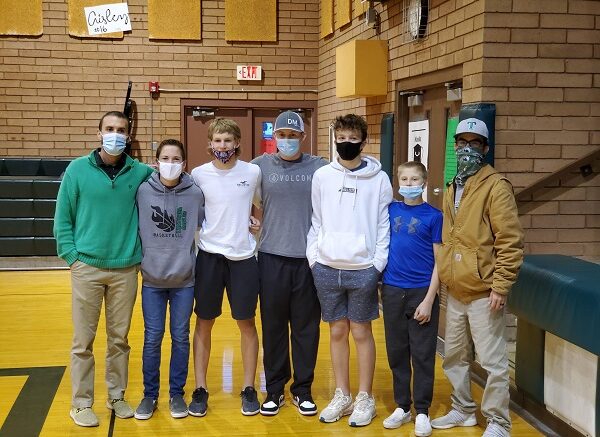 THATCHER — The quick thinking and calm nerves of a group of Thatcher Middle School students saved the life of their basketball coach on November 23rd.

30-year-old 7th grade basketball coach Braunson Summers was wrapping up his first practice with his new team when he decided to run sprints with the team to end practice. After a few trips up and back down the court, Summers collapsed at mid-court.

8th grade coach Luke Ochoa was standing at the north end of the gym when Summers hit the court and sprinted to his aide. Ochoa realized that his colleague was not breathing and bleeding from his face and mouth. He then hailed the help two of his players, Branson Hughes and Brad Jones, to help him tend to Summers.

Ochoa then started chest compressions as 8th graders Wyatt Nicholas and and Wally Haller sprinted to the lobby of the gym to grab one of three AED’s mounted in the gym. As the pair returned with the AED, Justin West called 911 and Hughes and Jones were able to help position the pads on their coach.

According to West the 911 dispatcher was trying to walk them through using the AED and the students were already 5 steps ahead of the dispatcher.

“The AED started to count down 3, 2, 1 and said to stand back,” said Nicholas. “Then it shocked coach and it lifted him off the court. We thought we did it wrong.”

But in reality they did quite the opposite. They literally did everything right. Shortly after that, the ambulance arrived after being flagged down by Haller and Nicholas who had sprinted up to Highway 70 to make sure the ambulance crew was able to find them.

Experts say you have 2-5 minutes to revive a person with an AED. The students estimate they were able to accomplish everything in just about 4 minutes.

Summers was flown to a Tucson area hospital where numerous tests didn’t give him or his family any answers or diagnoses. He has since been released from the hospital and has reunited with his basketball team.

Summers said he doesn’t remember anything about that day, only waking up in the hospital, but will be forever grateful to everyone involved with saving his life.

“After hearing the way that these kids I had know for just over an hour reacted when I went down impresses me more every day,” said Summers.

Thatcher Police Officer James Whisman was the first officer on the scene and was impressed with what he saw. “The call came out as a juvenile down but when I arrived I realized that wasn’t the case,” he said. “I’ve been a cop for 14 years and have never been to a scene involving youth that were this calm.”

The advice the group of students would like to convey to anyone that has never used an AED before is to stay calm and follow the directions.

Coach Ochoa said the community support of everyone involved has been overwhelming. From the school admin to the parents, everyone has sent their well wishes to him and the group of students.

The Summers family has privately thanked the group of students and Coach Ochoa.

The basketball season tips off January 19th for Thatcher Middle School with Coach Summers on the sidelines thanks in part to the actions of Wyatt Nicholas, Wally Haller, Justin West, Branson Hughes and Brett Jones who regardless of their stats on the court will most definitely be MVP’s this season.