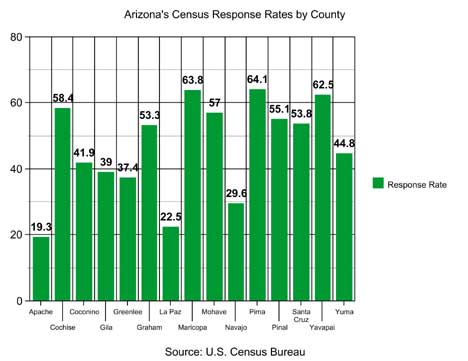 THATCHER — Thatcher and Safford continue to outpace the rest of Graham County — and the state — when it comes to responding to the U.S. Census.

Pima is at 46.2 percent response rate, placing it 65th in the state. However, that ranking does not reflect the town residents’ improvement over 2010.

“Eighteen (percent) 10 years ago was their total last time,” said Ashley Smith, who is coordinating the Census for Graham County.”

Graham County sits right in the middle with the eighth-best response rate in the state at 53.3 percent.

“We received a CARES grant from the federal government based on population, the state money is based on population — that was $2.4 million — we received funding for our Sheriff’s Office for equipment and that’s based on population, our schools. There are so many programs that are population base, that it really is important. You may have seen on billboards the $3,000 estimate per person (and) what most people don’t realize is that’s over 10 years,” David said during a recent appearance on Voice of the Valley.

Arizona is at 60 percent response rate, placing the state 33rd in the nation. The top responding state is Minnesota at 72.5 percent, while the state with the lowest response rate is Alaska at 50 percent.