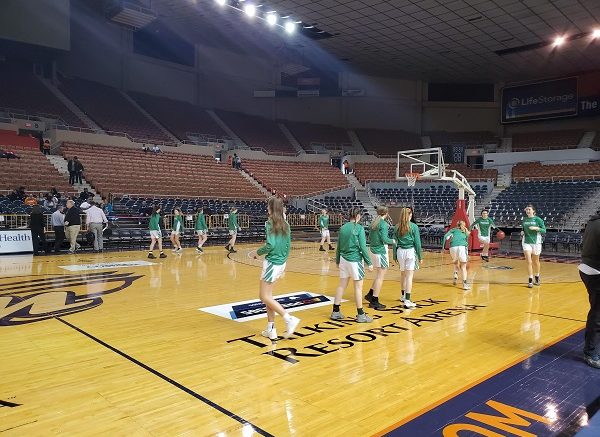 The Thatcher Lady Eagles warm up at the Madhouse on McDowell before their semifinal win over St. Johns.

PHOENIX — It wasn’t pretty but it was effective Friday morning for the Thatcher Lady Eagles in their 49-36 semifinal win over St. Johns. It could’ve been the 9am start time or that the Madhouse on McDowell felt more like an icebox than an arena, but whatever the reason it was a slow start.

Thatcher was able to get shots in the paint in the first quarter as Taya Baldwin had 5 and Olivia Lunt had 4 off the bench to lead the Lady Eagles to a 13-9 first quarter lead.

In the 2nd quarter there were nearly as many fouls called as points made. Each side only was able to muster 7 points apiece and Thatcher led 20-16 at the break.

The Lady Eagles upped their lead in the 3rd quarter with 8 points from Cassidy Wakefield and 5 more from Baldwin. In the process, the fouls quickly mounted for both sides as 3 Thatcher and 2 St. Johns players had 4 fouls at the end of the quarter. Thatcher led 35-25.

THS was able to hold on in the 4th quarter despite a push by Brooke Patterson and Kinley Crosby of St. Johns. They scored 8 of the team’s 11 points in the quarter. Thatcher lost PG Mia Carter midway through the quarter with her 5th foul but Baldwin and freshman Ashlyn Thompson handled the pressure in her absence. The Eagles played keep away for most of the final minutes before the final horn and the win 49-36.

Baldwin led the way for Thatcher with 13 points and 11 rebounds. Wakefield added 12 points and 7 rebounds. Lunt ended with 6 points and 12 rebounds off the bench.

The Lady Eagles will play #1 Camp Verde at 2pm Saturday at the Veterans Memorial Coliseum. They beat Valley Sanders 56-49 in overtime.

You can hear the game on KATO 1230 AM in the Gila Valley or listen online by clicking here.