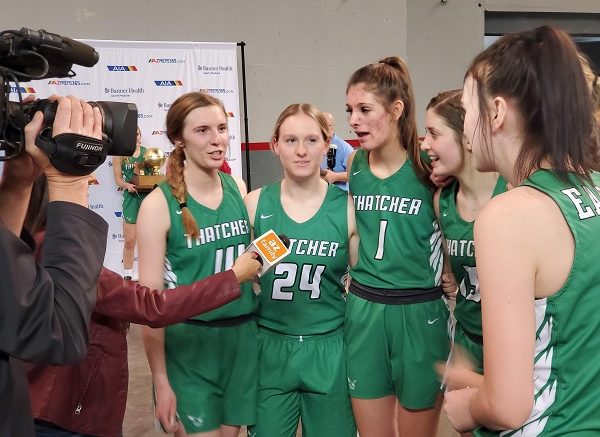 PHOENIX — The Veteran’s Memorial Coliseum lived up to its nickname, “The Madhouse on McDowell”, on Saturday afternoon as the Thatcher Eagles held on to a 51-50 win over #1 Camp Verde to with the 2A State Championship.

Both teams were riding 23 game winning streaks into the championship game. The Cowboys relied on Jacy Finley all season long in the paint. The 6’4″ center made it tough on teams to find a way to guard in her in the paint. Thatcher’s solution was sophomore Olivia Lunt. She gave up four inches to Finley but her leaping ability made her the obvious choice.

Lunt responded to the call and finished with 8 points but more importantly 10 rebounds. The Lady Eagles out rebounded Camp Verde 48 to 31. Taya Baldwin grabbed 13 rebounds as well. Finley still finished with 24 points and 17 rebounds but had to work for all of them.

Cassidy Wakefield showed up big offensively for Thatcher. Listed at only 5’9″ on the roster, Wakefield wasn’t intimidated by the taller Finley and dumped in 19 points with a combination of spin moves and pump fakes in the lane.

Despite the great effort the Lady Eagles found themselves down 41-38 at the end of the third quarter but outscored Camp Verde 13-9 in the 4th. Camp Verde had the ball with 5.4 seconds down 3 and were able to get the ball inside to Finley for a layup and the 51-50 win for Thatcher.

Griffin is in his first season ever as a varsity high school coach. It is the Lady Eagles first state championship since 2015/16.

Thatcher will lose only one starter from this year’s team as they move up to 3A next season.