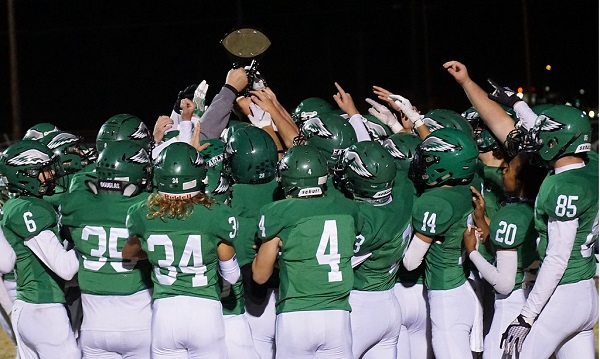 Thatcher celebrates with the traveling trophy after beating Safford 27-14. Photo by BryHard

SAFFORD — It wasn’t the typical overflow crowd on hand for the crosstown rivalry game between Safford and Thatcher on Friday night but those in attendance were treated to another great game between the two.

The teams took a quarter to work out the nerves and feel each other out as the two traded punts the entire first twelve minutes.

Thatcher opened the scoring with 4:32 remaining in the first half with a Michael McBride 1 yard touchdown run to give the Eagles a 7-0 lead.

Safford wasted no time answering back when Christian Smith powered in for a 5 yard score. The touchdown was set up by long runs of more than 30 yards each my Eduardo Ogaz and CJ Scrivner.

The teams would head to halftime tied at 7.

The third quarter was the difference as Thatcher dominated the line of scrimmage. The Eagles regained the lead on a 30 yard run by sophomore quarterback Brandon Napier then after a successful onside kick recovery, Napier again called his own number for a 1 yard score to put Thatcher up 20-7 with just under six minutes left in the 3rd quarter.

Safford didn’t go down without a fight though. Ogaz took the opening play of the 4th quarter 31 yards for a touchdown to cut the Eagle lead 20-14. That was as close they would get though as Thatcher running back Mark Wren put the final touches on the Eagle win with an 18 yard scamper to make it 27-14 Eagles.

“We had a great game plan on paper,” said Thatcher head coach Dan Jones. “I’m proud of the way they executed it and got the win.”

The win secures a playoff spot for Thatcher. Safford will also qualify for the playoffs. The 3A brackets will be released sometime Saturday afternoon.

Wren again led Thatcher with 114 yards on the ground. It is 4th straight 100+ yard rushing game. Napier rushed for 40 yards and the two scores.

Ogaz led the Bulldog offense with 112 yards and a touchdown. CJ Scrivner had 91 on the ground as well. Safford out gained Thatcher by over 100 yards on offense but committed 13 penalties for 100 yards that hampered their scoring chances.

Thatcher wins the traveling trophy for the 3rd straight year and have won 9 of the last 11 meetings with Safford.

For a free photo gallery of the game click here.