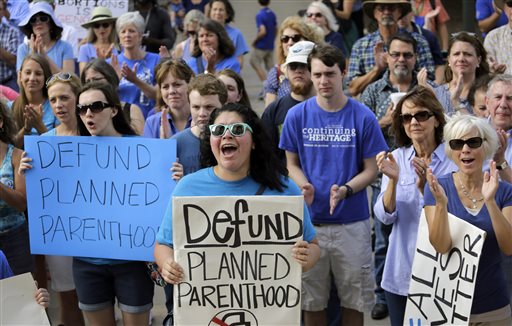 FILE - In this July 28, 2015, file photo, Erica Canaut, center, cheers as she and other anti-abortion activists rally on the steps of the Texas Capitol in Austin, Texas, to condemn the use in medical research of tissue samples obtained from aborted fetuses. Texas announced Monday, Oct. 19, 2015, that it was cutting off Medicaid funding to Planned Parenthood clinics following undercover videos of officials discussing fetal tissue, potentially triggering a legal fight like the one unfolding in neighboring Louisiana. (AP Photo/Eric Gay, File)

Texas health officials sent a letter to Planned Parenthood affiliates saying the clinics were potentially “liable, directly or by affiliation, for a series of serious Medicaid program violations” highlighted in the videos.

Republican Gov. Greg Abbott ordered an investigation after the footage, which Congress also is investigating, was released by an anti-abortion group that alleges Planned Parenthood illegally sold fetal tissue for profit.

Planned Parenthood blasted the decision, noting that thousands of women seek non-abortion health care services through Medicaid at its clinics statewide. The organization also has denied allegations levied by the Center for Medical Progress, saying the videos were deceptively edited.

“It is completely outrageous that Texas officials are using these thoroughly discredited, fraudulent videos to cut women off from preventive health care, including cancer screenings, HIV testing, and birth control,” Dawn Laguens, executive vice president of Planned Parenthood Federation of America, said in a statement.

“We will fight back against this outrageous, malicious, political attack in Texas with everything we’ve got, and we will protect women’s access to the health care they need and deserve.”

The move came just hours after a federal judge ordered Louisiana to provide Medicaid funding for at least 14 more days to Planned Parenthood, which filed a lawsuit after Louisiana Gov. Bobby Jindal — a Republican presidential candidate — ordered his state to block funding in the wake of the videos.

The lawsuit argues that Louisiana can’t end funding for non-abortion services, such as cancer screenings and gynecological exams. Planned Parenthood says 5,200 low-income Medicaid patients obtain services through its two Louisiana clinics, neither of which offer abortions.

Laguens stopped short of announcing a lawsuit in Texas, but she noted courts have ruled that federal law prohibits states from booting abortion providers from Medicaid, including in Indiana and Arizona. A similar court fight also is ongoing in Arkansas.

“In every state where this fraudulent smear campaign has been invoked, Planned Parenthood has fought for our patients to continue getting the high-quality, compassionate health care we provide, and in every state we’ve won,” she said.

The letter sent to Texas clinics appears to offer a pre-emptive defense against such claims. It notes that “there are thousands of alternate providers in Texas” and that the Republican-controlled Legislature has denied as much funding as possible to Planned Parenthood since 2013, including shutting it out of the Texas Women’s Health Program. The state-funded program provides health care to poor women and families.

Abbott, Texas’ former attorney general, praised health officials for the decision. In a statement Monday, the governor said ending the organization’s participating in the joint state-federal Medicaid program “is another step in providing greater access to safe health care for women while protecting our most vulnerable — the unborn.”

The videos were released, starting in mid-July, by anti-abortion activists who posed as representatives of a biomedical firm. They sought to negotiate the purchase of fetal organs from some Planned Parenthood personnel. Planned Parenthood has denied seeking any payments beyond legally permitted reimbursement of costs.