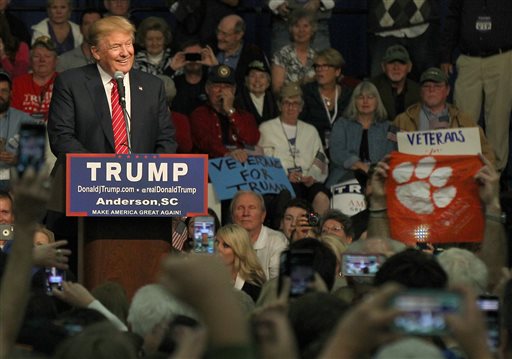 Speaking Monday evening in front of an enthusiastic crowd of thousands at the Anderson Civic Center in South Carolina, the billionaire businessman said the race so far has taught him that money is less important than resonating with voters.

“Money is less of a factor,” he said. “You can have all the money in the world, it’s just not going to help. It’s not just going to help, I’m convinced.”

Financial disclosure reports filed with federal regulators last week show that Trump has been powering his campaign with tens of thousands of small-dollar contributions, despite vowing early on to self-fund his campaign. His supporters have also launched several super PACs that can raise unlimited funds to support his bid.

Still, he has raised and spent significantly less than many other candidates including former Florida Gov. Jeb Bush, a fellow Republican, and Democratic front-runner Hillary Rodham Clinton.

The rally marked Trump’s latest visit to the early-voting state, and attracted a loyal following of supporters, hundreds of whom began lining up outside the venue hours before the doors opened, some carrying signs saying that read, “Trump, Make America Great Again.”

Inside, they began chanting “Trump. Trump Trump!” more than an hour before Trump launched into his usual stump speech, which touched on familiar themes, including touting his standing in the polls and blasting the media.

Those in attendance said that Trump represents a break from politicians who say one thing, but do another.

“He’s the best candidate — he’s blunt, he tells it like it is,” said Duane Brown, 51, of Anderson, a farmer who also works in manufacturing.

“He’s fighting to get our rights back,” he said. “He won’t back down.”