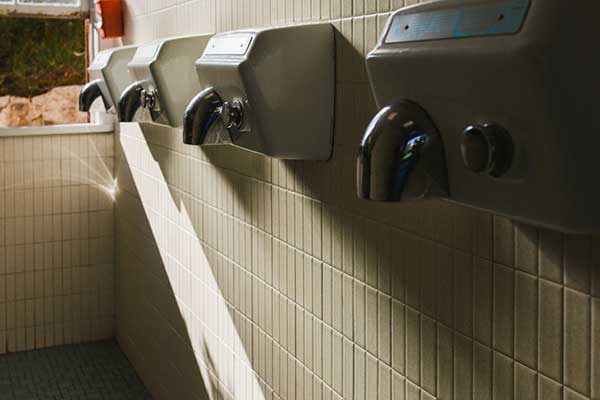 Many public restrooms have hand dryers instead of paper towels. Recent studies have found that these devices may actually be harmful to your health in several ways. The first potential hazard was the subject of 13-year-old Canadian scientist, Nora Keagan’s science fair project. The results of Keagan’s research was published in the Canadian journal Paediatrics & Child Health.

Using a professional sound level meter, Keagan measured the sound level of hand dryers in 40 public restrooms in Alberta Canada. She found that many of the hand dryers exceeded 100 decibels. In an interview with NPR, Keagan said that her loudest measurement was 121 decibels from a Dyson Airblade model. “And this is not good,” she said, “because Health Canada doesn’t allow toys for children to be sold over 100 decibels, as they know that they can damage children’s hearing.” Keagan pointed out the the sound intensity of these dryers is worse for children because their ears are closer to the dryer than adults.

The US National Institute for Occupational Safety and Health (NIOSH) has recommended that adults should not be exposed to 85 decibels for more than 8 hours. Longer exposure and exposure to sound levels higher than 85 decibels is considered hazardous. Here’s a quick example of sound pressure levels and their effect on our ears:

Apparently, the loud sound put out by hand dryers is not the only health risk they pose. Another study published in the journal Applied and Environmental Microbiology indicates that drying our hands with a hand dryer may actually be spreading germs.

When a lidless toilet flushes, a plume of fecal bacteria is shot up into the air. This, somewhat gross action is known as a “toilet plume.” The finding of the research indicated that air blasted “plates exposed to hand dyer air for 30 seconds averaged 18 to 60 colonies’plate.” Retrofitting hand dryers with HEPA filters reduced bacterial levels significantly, but “potential human pathogens were recovered from plates exposed to hand dryer air whether or not a HEPA filter was present and from bathroom air moved by a small fan.” The study concluded that there is evidence that bathroom hand dryers can disperse bacteria from hands or deposit bacteria on surfaces, including recently washed hands.

Apparently, the author of the study, Peter Setlow, now prefers paper towels, which are reportedly stocked in all 36 bathrooms used in the study.