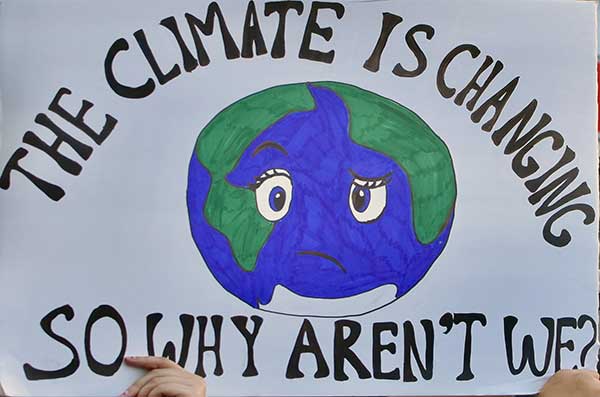 A climate sign held by protestors at a 2019 Climate Strike

Ariz. – Young people from across Arizona and around the world will be taking to the streets F riday to take part in a strike to urge cities to take action on climate change.

Rallies organized by the Global Climate Strike are expected to draw thousands of students and their adult allies to local city halls to demand public officials act to fight the climate crisis.

“We want cities of Arizona to declare climate emergencies and make climate action plans that are in line with the science on climate change,” he states. “Climate change is happening and it’s going to happen whether we like it or not. So, we think that you should be prepared for it.”

Denis say he expects students and their adult allies – including workers, educators, scientists and politicians – to be at his group’s event in Peoria in the West Valley.

He says the group has drawn support from hundreds of environmental and other groups, including Elders Climate Action, the Sierra Club, the Union of Concerned Scientists and Physicians for Social Responsibility.

Denis says his group is expecting a high turnout at strike locations across Arizona.

“There’s going to be events in cities across the state with Phoenix, Tucson, Flagstaff, Mesa, Scottsdale,” he states. “In the West Valley, we’re expecting about 100 people. But other cities have hundreds to about maybe 200, 300.”

Denis says the Arizona Youth Climate Strike is made up of mostly students who believe they are fighting for their future.

“We don’t have all the answers,” he acknowledges. “We’re just calling on our city to just listen to the science and take action where it’s needed because honestly, right now, a lot of cities aren’t doing anything and aren’t even acknowledging that we have a problem.”

Denis says the groups plan to engage with state, local and national candidates during the 2020 elections to encourage them to include climate change in their parties’ platforms.

Organizers of the strike have a website, strikewithus.org, where people can enter their ZIP code and find a rally near them.