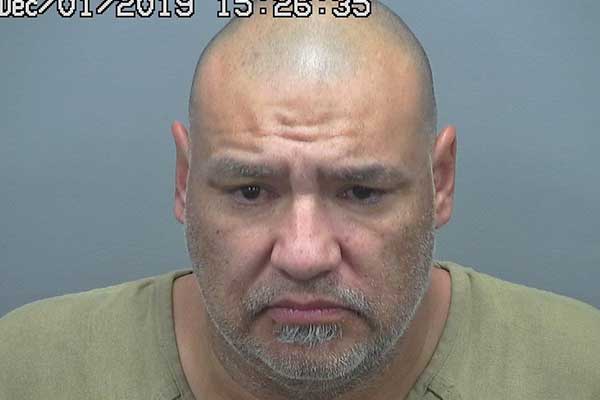 Safford – Last Saturday night at approximately 11:30 p.m., at least 10 law enforcement officers converged on a local hotel after reports of shots fired from one of the rooms. The man in the room, identified as Michael Benavidez, had called dispatch and said that he had fired shots at people who were following him and trying to get into his room. Dispatch advised responding officers that Benavidez had a gun. The first officer on the scene encountered a group of people who were going into their room. The officer asked if they had heard or seen anything and they said that they had heard three loud bangs, which turned out to be shots fired by Benavidez. A man in the group said that there was nobody outside Benavidez’s room and that they did not see or hear a disturbance around the room.

The officer stood behind a brick pillar to monitor the room as other officers arrived on the scene. An officer went to the front office to confirm that Benavidez had been assigned to the room where shots had been fired. Benavidez was reportedly on the phone with dispatch while the officers were out in the parking lot. Dispatch advised the officers that Benavidez refused to put his gun down until an officer came up to his door and he could see it was an officer. The officers asked dispatch to tell Benavidez to put down the gun and come out so that they could talk with him. Benavidez refused and disconnected his call to dispatch.

More officers arrived on scene from Safford, Thatcher and the Sheriff’s Office. A Safford officer went to the Safford Police Department and got a ballistic shield and a 40 mm non-lethal. With the shield, officers approached the room. When they reached the room they saw a bullet hole in the door of the room. They retreated back to their original positions and waited for additional law enforcement units. Once the area was contained, three officers approached the adjacent room to told the tenant to leave the room and go to the hotel lobby area. The officers then went back to their positions. One of the officers used a vehicle PA system to talk to Benavidez and ask him to come outside to talk with them. Benavidez eventually came to the window of the room and both of his hands could be seen with only a water bottle in one hand. Benavidez then opened his door and peaked outside. One of the officers tried to talk to him but Benavidez apparently didn’t believe he was a police officer. Benavidez reportedly said, “is that you Billy? That’s Billy.” He told the officer that he wasn’t going to come out. Billy was apparently the name of one of the people that Benavidez thought was following him.

After some deliberation, Benavidez stepped outside. He apparently still believed that one of the officers was Billy and said that he couldn’t see well enough to verify that the officers were really law enforcement. A police captain stepped forward and asked Benavidez if they could meet half way. Benavidez was hesitant, still looking at the officer he believed to be Billy. Two officers approached Benavidez in the parking lot and handcuffed him without incident. Officers checked the room to make sure there were no other people inside. While clearing the room, they noticed a handgun lying on the bed.

Benavidez admitted to shooting his gun inside the hotel room but insisted that people were trying to get him. The only name he could come up with to identify his alleged assailants was Billy with no last name. His story would jump from what he was seeing and hearing in the room to incidents that happened at his residence. He repeatedly said that he had eaten some Gushers (a fruit snack) his roommates gave him. Benavidez gave permission for his room to be searched. In the room, officers found a 40 caliber handgun, two magazines and an expended hollow point round. Two 40 caliber casings were found in the shower and two were found on the bathroom counter. Three casings were on the floor next to the toilet. An expended full metal jacket round was found on the carpet in front of the bathroom. A metal smoking pipe with burnt residue was also found.

An ambulance was called to the scene to evaluate Benavidez because he said he was diabetic and needed insulin. Ambulance personnel said that Benavidez’s blood sugar was high and he needed to go to the hospital. Benavidez was transported to the ER with police escort.

Authorities continued to question Benavidez at the hospital. He told officers that he had started shooting inside the shower and that some of the rounds were shot in quick succession. He said that he had left his truck at home and took a taxi to avoid being followed from the convenience store. He said that he hadn’t been sleeping or eating. While in his hotel room he believed he heard voices from the door as well as outside the bathroom window. He said that he responded to the voices by telling them that he had a gun and was going to shoot them. He said that he pleaded with them to leave but they kept harassing him.

Benavidez was medically cleared and and the officers were apprised that ER staff did not find any reason for him to be in a paranoid state without getting blood test results.

Benavidez was transported to the Graham County Jail and booked for seven counts of disorderly conduct for each round fired, endangerment, criminal damage, and possession of drug paraphernalia.