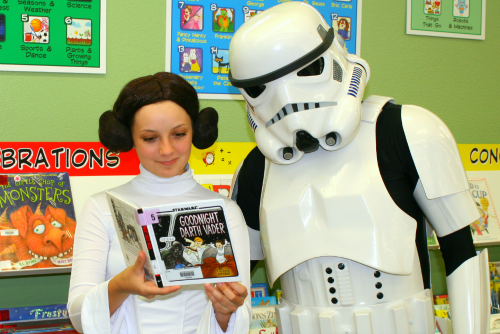 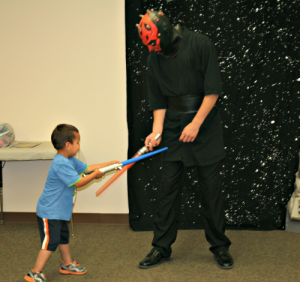 The second annual star wars day kicked off with Darth Maul, Princess Leia, and a local Storm Trooper coming to visit
the library in full star wars garb. There was an area set up for people to take photos with their favorite characters, as well as coloring pages and craft areas set up for children. Star wars books were everywhere, and a sizable star wars toy collection was on display for the patrons to admire. Some of the librarians even dressed up for the event. Marrissa Tayler, a local library volunteer, based her black costume and face paint off of the Darth Maul style. Having just moved to the Gila Valley recently, Tayler was impressed by star wars day. “It’s a lot of fun, and a great delight to see the community get together and having fun,” she stated. 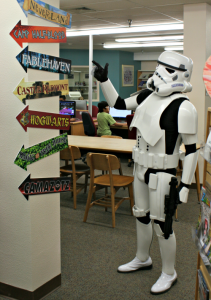 Fans came together from all over our valley to be a part of the library’s star wars day. Scott Russell was our local storm trooper, and he was very entertaining in his full storm trooper uniform. Complete with blaster, and a sense of not finding the droids he was looking for, Russel did an exceptional job of playing a storm trooper. Caden Skinner portrayed a stoic yet menacing Darth Maul, complete with red lightsaber and fierce fiery eyeballs. Not to be outdone by her co-stars, Leah Talley’s depiction of the distressing damsel, Princess Leia, was just what the library needed. When the little kids were too scared to talk to the menacing Darth Maul or Mr. Trooper, they could always approach Princess Leia.

The day was quiet in the morning, but just before school got out the crowds arrived at the library. After the library closed, the door count was tallied up. Roughly 200 people visited the library on May 4, 2016. Whether they came for the star wars event or not, the force was obviously with them!