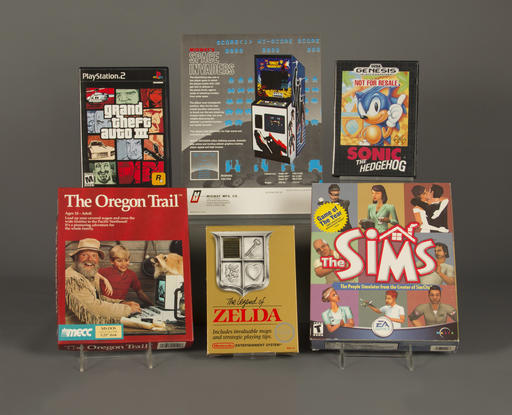 In this April 21, 2016 photo provided by The Strong museum in Rochester, N.Y., the 2016 inductees to the World Video Game Hall of Fame are displayed. From top left, clockwise, are "Grand Theft Auto III," "Space Invaders," "Sonic the Hedgehog," "The Sims," "The Legend of Zelda," and "The Oregon Trail." (Bethany Mosher/The Strong museum via AP) MANDATORY CREDIT

ROCHESTER, N.Y. (AP) — A video game that had players zapping space aliens with lasers and another that put them in covered wagons in 1848 have been inducted into the World Video Game Hall of Fame, along with four other games recognized for their influence on gaming and pop culture.

“Space Invaders” and “The Oregon Trail,” along with “Grand Theft Auto III,” ”Sonic the Hedgehog,” ”The Legend of Zelda” and “The Sims,” make up the class of 2016 honored Thursday at the hall inside The Strong museum in Rochester.

The winners were chosen from among 15 finalists culled from thousands of nominations from around the world. Contenders that missed the final cut were: “John Madden Football,” ”Elite,” ”Final Fantasy,” ”Minecraft,” ”Nurburgring,” ”Pokemon Red and Green,” ”Sid Meier’s Civilization,” ”Street Fighter II” and “Tomb Raider.”

The Strong, which also houses the National Toy Hall of Fame, opened the World Video Game Hall of Fame last year to recognize electronic games of all types — arcade, console, computer, handheld and mobile. To get in, games must have had sustained popularity and influenced the video game industry or society.

About this year’s honorees:

The high score display at the top of “Space Invaders” quickly became a standard feature in arcade games. In 1980, the game that had been released in Japan in 1978 broke free from the arcade and entered the home console market to become the Atari 2600’s most popular game.

“The Oregon Trail” was developed by three student teachers in 1971 and gave many players their first introduction to computers. It was designed to teach Minnesota schoolchildren American history by making them settlers heading west toward the Pacific coast. Jon-Paul Dyson, director of The Strong’s International Center for the History of Electronic games, said “The Oregon Trail” pioneered the valuable blend of learning and play.

The first 3-D open-ended game that let players control the action became a model for the “sandbox-style” games that followed. But the flamethrowers and automatic weapons that were part of the action in the 2001 best seller fed worries about the influence of video game violence and reminded that video games are not just for kids, said Jeremy Saucier, the history center’s assistant director.

“Sonic the Hedgehog” was Sega’s answer to Nintendo’s Mario character, and was launched in 1991. It remains the best-selling Sega Genesis game of all time and has inspired more than 20 additional games and spin-offs, as well as a television show and comic book, said Strong Associate Curator Shannon Symonds. It also inspired the first video game-themed balloon in Macy’s Thanksgiving Day parade.

“THE LEGEND OF ZELDA”

“The Legend of Zelda” of 1986 also spun off sequels, comic books and a television series. Inspired by creator Shigeru Miyamoto’s childhood expeditions through woods and caves, it popularized non-linear open-world exploration.

“The Sims” provided a digital dollhouse setting for endless domestic dramas and gave players flexibility to tell stories in an open-ended environment. Its nearly 200 million sales in 60 countries and more than 20 languages following its 2000 release make it the best-selling PC game franchise ever.