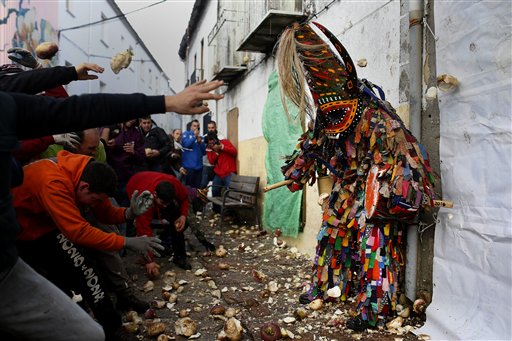 PIORNAL, Spain (AP) — Hundreds of people have been running through the streets of a tiny town in southwestern Spain, chasing a fancy-dressed, beast-like figure and pelting it with turnips.

The event Wednesday was part of the bizarre ‘Jarramplas’ festival which is held in Piornal each Jan 19-20.

Following the yearly tradition, a town volunteer donned a costume of multicolored ribbons and a protective devilish mask with horns. He then charged through the streets, beating a drum until he couldn’t stand the punishment anymore.

Local farmers supplied some 18 tons of turnips for the festival. Its origins are uncertain but the local tourism office says the ‘Jarramplas’ figure represents a cattle thief. Others say it has religious roots.

The festival finished later Wednesday with musical and gastronomic celebrations.