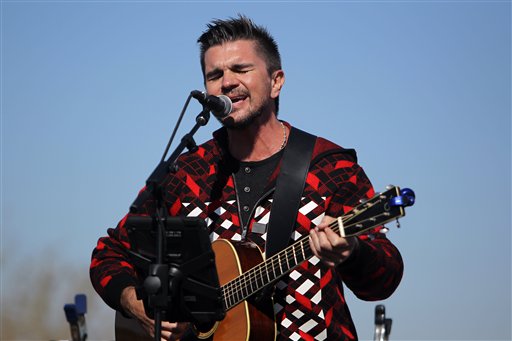 Colombian rock star Juanes perform with John Legend, unseen, on top of a flat bed truck platform for dozens of demonstrators across the street of a detention center in Eloy, Arizona, Wednesday, Jan. 20, 2016. The artists performed in front of some 250 people in protest against massive migrants deportations as part of the Legend's campaign #FREEAMERICA. (AP Photo/Ricardo Arduengo)

ELOY, Ariz. (AP) — Colombian musician Juanes and singer John Legend met immigrants at a jail in Arizona on Wednesday before performing for a small crowd outside the facility to draw attention to immigration and mass incarceration.

The Grammy winners each played two songs separately and one together — Bob Marley’s “Redemption Song” — as dozens of people sang along in Eloy, about 60 miles southeast of Phoenix.

“The reason why we’re here, one, is because we want to bear witness to what’s happening so we could tell the world about it,” Legend said to the cheering crowd.

Juanes played the guitar and Legend the piano atop a flatbed truck parked across the street from the federal detention center. An empty desert field served as the backdrop while people in the crowd held large signs and chanted “Not one more deportation” and “Si se puede,” meaning “Yes we can.”

The concert was staged for an audience made up primarily of activists brought there by an advocacy group, along with some relatives of detainees. The concert was also filmed by a camera crew for a documentary and a broadcast of the performance on “Good Morning America.”

The performers’ original intention was for the detainees to hear the music. But organizers were told the inmates were not let out of their cells to hear the concert.

Earlier, Juanes and Legend took a tour of the detention center and spoke to detainees inside.

Juanes said in Spanish that he was “heartbroken” by what he saw.

“It’s very hard to understand that someone is deprived of their freedom unjustly, and that’s why we’re here with our music, with our culture, which is the strongest tool to bring attention and give a voice to those who don’t have one,” he said.

Legend said the immigrants have gone through a great deal of hardship.

“It’s life and death for a lot of people, a lot of people that come here, come through a lot of hardship, physically is very difficult to get there, and then every day that you’re here as an undocumented immigrant you’re in danger of being detained again, having your employer being raided, being separated from your family,” he said at a different event Wednesday. “They go through much difficulty here to live the American dream to be able to work and feed their family, but also to live freely.”

Maria Gomez, of Phoenix, said the singers’ visit will let immigrants know that people care about them. The 16-year-old said her brother and other relatives are being held in Eloy after traveling from Mexico City to Nogales, Arizona, where they sought asylum. Gomez said her family had been victims of kidnappings for ransom.

“It’s something very special because not any artist would do this,” Gomez said.

Francisca Porchas, of Puente Arizona, which helped organize the event, said her group’s goal was for the singers to meet the detainees and families who have been fighting against strict immigration policies and raids. She said she hoped the visit would give detainees hope.

“For them it’s something very important that they know they’re not forgotten,” Porchas said.

The organization transported about 60 people to the event in vans, while others drove on their own. Puente has been a vocal critic of the Eloy Detention Center over the deaths of several inmates because of suicide and medical problems. The group says immigration authorities aren’t transparent about what goes on inside the jail.

There are nearly 1,500 detainees being held in Eloy. U.S. Immigration and Customs Enforcement said in a statement it was “committed to ensuring the safety and welfare of all those in its custody.”

“This afternoon, residents of the Eloy Detention Facility’s south side were confined to their cells and residence pods for approximately one hour after concerns arose that an unsanctioned concert being conducted within view of the center’s south recreation yard might provoke a disturbance. The decision to briefly restrict residents’ movement was made out of an abundance of caution for both detainees’ and employees’ safety,” the agency said.

Juanes is a Latin American mega-star who has sold millions of albums and topped the Billboard Latin chart in the U.S. for a record 92 consecutive weeks with his breakthrough “Un Dia Normal” in 2002. Legend has won nine Grammys, and he won an Oscar last year with the rapper Common for the song “Glory” from the film “Selma.”